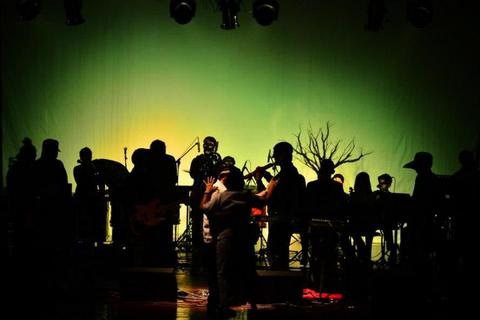 Tan Frío el Verano (Post Rock / Electronic / Shoegaze) ("Such Cold Summer") started out as a musical project by Daniel Mandino, Rafael García and Juan Rojas from Barquisimeto, Venezuela. After some elements changed, the band went through a transformation process becoming more of an audovisual collective, merging graphic and visual features of conceptual art such as painting, photography, short films and conceptual stage production.

The collective has produced a physical compilation of Venezuelan artists named "El Soundtrack de tus historias" Vol.1 ("The soundtrack of your stories"), a free download EP named "Invierno" ("Winter"). A compilation of remixes of their song "Pulsar Nébula" made by notorious bands and artists from Venezuela such as La Vida Bohéme and DJ Zardonic, and as the first of its kind in the country, a conceptual LP/Book named "Primavera" (Spring), also manufactured as a physical CD signed by the SouthKorean indepentent label "Onion Music". The collective has been part of important musical and artistic festivals around the country such as Por El Medio de la Calle 2012 (Caracas) and Velada Santa Lucía (Maracaibo), and has shared the performance stage with bands such as Grammy Nominee's FamasLoop, among others.

Tan Frío el Verano is currently managed and represented by the Agency World Musical Madness, also signed to the SouthKorean label "Onion Music", the polonian Netlabel "Half Eaten", the French Netlabel "Paperheart" and the russian netlabel "Subwise", and their music, short films and conceptual writtings have had an oustanding projection throughout the international scene, granting praises from newspapers columns, blogs, labels, bands, artists and critics.