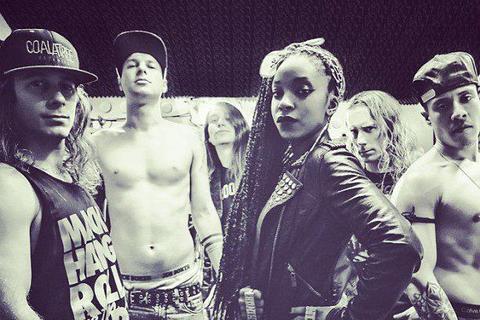 Shinobi Ninja is a Brooklyn-based party rock circus with an explosive live show. The band’s music mashes up the sounds of 311, The Beastie Boys, Sublime, and Rage Against the Machine. This Year, SN has performed alongside Snoop Dogg and The Black Keys at the inaugural Catalpa NYC Music Festival, 311's Pow Wow Festival, The Warped Tour, Summerfest, SXSW, CMJ and more. The official video for their new single “Slow Mourning” became their second add to MTVU's regular rotation alongside "Rock Hood" which was featured in the soundtrack to the NBA 2K12 Video Game and on Q104.3FM in NYC. Their groundbreaking iPhone video game app and debut album are for sale in the iTunes Store, and their new mixtape is available for free download on www.ShinobiNinja.com

“To put it simply, they are a walking, breathing and screaming cartoon: Loud, colorful and full of enough energy to put nearly any another band to shame.” - Radio Exile

Prior to forming Shinobi Ninja, each member had respective careers in the music industry. Vocalist, D.A. had been a busy NYC musician, producer, and engineer at Progressive Studios. Vocalist, Baby G, who worked as a singer and dancer for major label artists like Rihanna, Diddy, Cassie, and Santigold, was a fixture in the vocal master class held at Progressive by esteemed vocalist, Craig Derry of the Sugarhill Gang. Twin brothers, guitarist, Maniac Mike and, drummer, Terminator Dave ran The Sound Machine, a recording studio where they produced their projects and the work of other artists. Alien Lex worked at the Sound Machine. DJ Axis, an accomplished battle and club DJ, played in bands with Mike and Dave.

After two years of of making a living together at Progressive Studios and The Sound Machine, this group of eclectic musicians decided to combine influences and form Shinobi Ninja in March 2008.

The show at Empire Automotive on Saturday, March 16