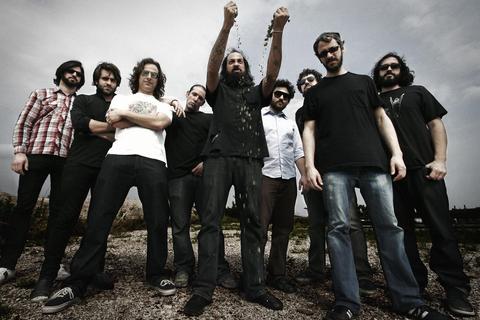 Having scalded listeners’ ears with sonic lava on Budos I and stung them with venomous frequencies on Budos II, The Budos Band delivered on their promise to spread the epidemic of “Budos Fever” far and wide with the release of The Budos Band III. The cobra is poised to strike if anyone dares challenge The Budos on their quest. And, if there was ever any question whether the brotherhood of The Budos is instrumental afro-soul royalty, the Chateau de Budos that graces the back cover of The Budos Band III assures all that the group is strong – unstoppable even – and will use all of nature’s power to ascend to their rightful throne.
“Heading into the studio for Budos III, I really thought we were going to make the first psychedelic, doom-rock record ever recorded at Daptone,” recounts longtime Budos de facto frontman and baritone saxophonist, Jared Tankel, “but somehow it ended up sounding like a Budos record.” Recorded at the now infamous Daptone “House of Soul Studios” by the world-renowned production team of Bosco Mann and TNT, Budos III was tracked to analog tape and recorded live over the course of an intensely productive 48 hour period, much like its predecessors. The songs that emerged are unmistakably the type of tough sonic nuggets that have long earned The Budos Band the title, “the quintessence of Staten Island soul.” Replete with tight rhythms, blistering breakbeats, blaring horns and, yes, perhaps even a tinge of psychedelic doom-rock, Budos III brings the heat.
Composed, arranged and honed during weekly, beer-fueled Staten Island writing sessions – as well as more than 150 live gigs over the last two years – the band’s third full-length studio effort evinces the tight-knit and creative bond The Budos have come to share since the ten-piece ensemble’s inception in 2003. “The Budos have become more of a brotherhood,” explains bassist Dan Foder. “Egos suck, that’s why bands don’t last more than two records. Musically, we understand each other better now than when we were younger. That’s why this is our best record. We're all on point – our playing and creativity are at a higher level - and we understand what The Budos Band means to all of us: family and friendship.”

The sound of The Budos may be challenging for some to describe, but to the band, “Staten Island instrumental afro-soul” means internalizing such seemingly disparate influences as the Cairo Jazz Band, J.C. Davis, Mulatu Astatke, and Black Sabbath and coming together to form a mind-bending combination of rhythm and melody. The unique and signature sound of The Budos has become a favorite for music supervisors to use in TV, film and video games, as well as producers who have sampled The Budos on numerous hip-hop tracks.
The strength of the group’s bond and its music has allowed The Budos Band to accomplish feats rarely attained by instrumental groups. With collective sales of over 30,000 albums and tours that have spanned the US, Canada, and Europe, playing rock clubs and large festival stages, The Budos have developed a rabid fan base that spans genres and ages. At any given Budos show, one might see b-boys break dancing to the band’s funk and hip-hop beats; record junkies nodding their heads to the soul-infused melodies; metal heads thrashing to the dark and ominous guitar and bass riffs; and general music lovers who eagerly attend Budos shows and smile approvingly at the melting pot of music that takes place. Simply put, The Budos kill the live show and with each record, their ability to put the energy, sweat, and passion of the live experience to wax increases.

The show at ACL Live at the Moody Theater on Thursday, March 14