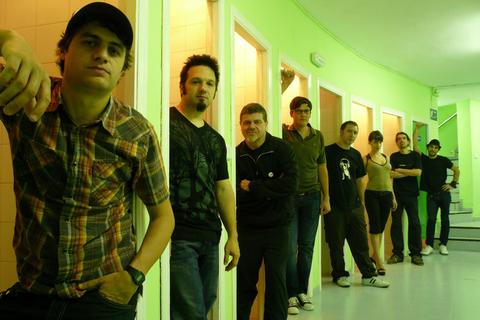 Even though Bajofondo has been a pioneer in what has been known all over the world as “electronica tango”, the group doesn’t consider that this definition is appropriate for their music. It’s been already five years since Gustavo Santaolalla conceived this project along with Juan Campodónico, with the idea of bringing together a collective of Argentine and Uruguayan artists dedicated to creating “contemporary music of the Rio de la Plata". The project, which appeared under the name Bajofondo Tango Club, initially was an alliance of producers, musicians and singers that took shape in the recording studio, and the release of their first album was the culmination of this process. With the passage of time and the multiple tours, this collective of artists with remarkable individual careers evolved becoming a true band, whose live performances are an amazing sensation all over the world. And as Bajofondo’s music grows, evolves and expands, the denomination of “electronica tango” becomes more and more inadequate.
Gustavo Santaolalla has a very concrete explanation for this: "we don’t like the label of “electronica tango”, because we don’t consider what we do to be either tango nor electronica. We believe we do music of the Rio de la Plata, and if you want to create a music that represents today’s sound of places like Buenos Aires and Montevideo –at least in our view-, obviously genres such as tango, murga, milonga and candombe are going to be present, because they are part of the genetic-musical map of that part of the world. But the 40 years history of Argentine and Uruguayan rock, hip hop and electronica also are part of that map and the history of that place”.

Their first work, Bajofondo Tango Club, was also the first release of VIBRA, a division of SURCO dedicated to researching electronica and its crossings with the various sources of Latin American music. The album, released in November 2002, features a very long list of guest artists, and it’s worth mentioning the participation of Jorge Drexler, Adriana Varela, Cristóbal Repetto, Adrián Iaies, Didi Gutman and Pablo Mainetti, among others. Bajofondo Tango Club quickly caused a stir in Argentina and all over the world because of the originality of its proposition; the songs could be heard in clubs as well as dance parties. This work won the prestigious Premio Gardel as the "Best Electronica Music Album" in Argentina –where the sales reached Triple Platinum- and won a Latin Grammy award as the "Best Instrumental Pop Album". The album has sold more than 300.000 copies all over the world. After selling out at the Teatro Oriente (Chile), Teatro Ateneo (Argentina) and Sala Zitarrosa (Uruguay), the collective was invited to participate in the Pirineos Sur (España), Creamfields (Argentina) and Mostra Sesc (Brazil) festivals.

Reflecting the idea of Bajofondo as a collective under which the members also develop their own works, in 2004 Luciano Supervielle –the youngest member of the band- released his solo album, Supervielle, presented by Bajofondo Tango Club and produced by Gustavo Santaolalla and Juan Campodónico. Besides the "regular members" of Bajofondo, Lágrima Ríos, Fernando Cabrera, Adriana Varela, Daniel Melingo, Cristóbal Repetto and rappers Contra Las Cuerdas, participate in the album, among others. Their versions of "No Quiero Otro" (by Piazzolla-Ferrer) and "Mateo y Cabrera", which utilizes a sample of the legendary Uruguayan composer and singer Eduardo Mateo, pay tribute to some of their main influences on both sides of the Rio de la Plata. Supervielle won another Premio Gardel as the "Best Electronica Music Album”. The unforgettable presentation of the album at the Teatro Solís in Montevideo was released in 2006 in the DVD Bajofondo Tango Club presenta: Supervielle en el Solís, under the direction of Pablo Casacuberta, and it documents this one in a lifetime event with astonishing quality of image and sound.

During the last five years, Bajofondo has toured all over the world non-stop, performing at the biggest World and Electronica Music festivals in the world such as Roskilde in Denmark, Womad in England, Cactus Festival in Belgium, Pirineos Sur Festival in Spain, Pohoda in Slovaquia, as well as 15 countries in the European Union. The band has toured the United States twice, culminating its 2006 tour at the prestigious Lincoln Center in NY. In 2007, Bajofondo appeared in London (at the legendary Barbican Center), Brussels, Amsterdam and Rio de Janeiro. In May 2009, Bajofonodo opened the Argentine Bicentennial festivities at the Obelisco in Buenos Aires in front of 200,000 people.

As tours went by and with the corresponding strengthening of Bajofondo, what began as a combination of programmings and samplings with acoustic and electric instruments – with some emphasis on the first – has evolved into a band in which everything is practically played live, with only a minimal percentage of sequences and programmings. At the present time, Bajofondo is an eight member band, with seven musicians and a VJ who triggers images in real time along with the music.
As a result of the band’s musical expansion, Bajofondo also started integrating elements of Latin American folkloric music in its performances, so when it came time to tackle their new album, they decided to do away with "Tango Club" to shorten their name simply to Bajofondo. The change in the name, more inclusive and with an immediate impact, mirrors the path Bajofondo’s music has followed.

Their new album, Mar Dulce, was recorded in real time, with all the members playing together in the studio as if they were a rock or a jazz group, a radically different approach than the one used on the first album. The album mirrors the mutation undergone by the band, in which today 20% is programmed and 80% is played live. In this occasion even the strings were played by a string section conducted by Alejandro Teran, in a tango orchestra fashion, including four violins, two violas and one cello.

Mar Dulce, released in July 2008, represents a new qualitative jump in Bajofondo’s evolution. The album was recorded in Buenos Aires, Montevideo, Los Angeles, New York, Tokyo and Madrid, and the multiplicity of locations reflects the cosmopolitan attraction of Bajofondo, as well as the eclectic list of guest artists: it includes the extraordinary British singer and composer Elvis Costello, Spanish rapper Mala Rodríguez, Canadian singer of Portuguese origin Nelly Furtado, virtuoso Japanese bandoneon player Ryota Komatsu and several Rio de la Plata artists whose origins cover the entire gamut from traditional to vanguard. Uruguayan artists participating range from the great Lágrima Ríos (this would be her last recording) and guitarist Toto Méndez (who was the musical director of Alfredo Zitarrosa’s quartet) to electronica duo OMAR and vocalist Fernando Santullo, ex-Peyote Asesino, a band that also included Juan Campodónico. Argentine artists include Gustavo Cerati, who in the 80’s was the frontman for Soda Stereo, the most popular rock group in Latin America, today a successful solo singer and Juan Subirá, keyboardist and composer of Bersuit, one of the most popular bands in Argentine rock, who on Mar Dulce makes a surprising appearance as a singer, revealing another facet of his talents.
Nevertheless, there’s something that unifies artists of such a variety of origins, nationalities and generations, and it’s a feeling that is very difficult to translate into words. If there was someone who defined tango as "a sad feeling one dances to", in the case of Bajofondo’s music we could expand the definition to "a feeling one may listen and dance to ". It’s something intangible, a certain melancholy that has something to do with existential issues and also with the cities’ old traditional barrios, what Santaolalla likes to call "cosmic tango". And we can find this feeling both in Elvis Costello and in Mala Rodríguez.

Even though for anyone listening to Bajofondo Tango Club and Mar Dulce the changes are evident, there’s also a Bajofondo aesthetic that remains a constant. There are no written laws for the music of this band, which evolves continually, but there are certain parameters that were present in the first album, were continued in Supervielle and also are present now in Mar Dulce.
As with any genre that comes into fashion, the so called "electronica tango” developed its own clichés, and that is precisely what Bajofondo tries to avoid no matter what. To the contrary, Santaolalla, Campodónico, and the entire band, are continuously trying to find and hone a language, working arduously in the selection of beats and bass lines, elements that have been present since the first album. Even though it’s a language in constant evolution to which they keep adding new ingredients, there is an aesthetic and a personal search that is present from the onset.
It becomes evident that what they like to call "bajofondista school" reaches new heights in Mar Dulce, in which those aesthetical parameters are more profound, due to the group’s new dynamics and the creative interaction of its members, creating new jewels such as "Pa’ Bailar" (where the tango and rock beats intersect in an irresistible danceable communion), "Fairly Right" (a happy meeting of the melancholy found in tango and the Beatle’s musicality, with the voice of Elvis Costello) and "Don Alfredo" (in which Bajofondo gets into the Uruguayan milonga, paying tribute to Zitarrosa with the participation of Toto Méndez, who was his guitarist), among other songs bound to become new classics in their repertoire.

Bajofondo recently signed to Sony Masterworks and will be releasing their new album "Presente" early in 2013.