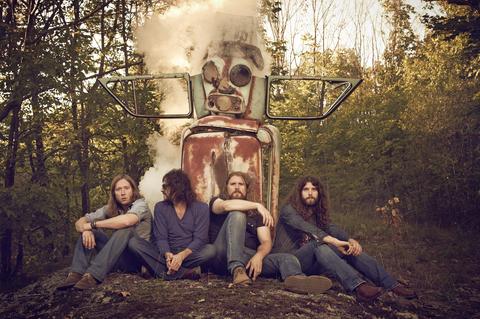 The Sheepdogs built their name on hard work and determination. Having funded their first three albums and early years of touring on their own, this rock and roll band’s momentum began to build exponentially with the release of the 2010 album, Learn & Burn. The band would go on to win three 2012 JUNO Awards (the Canadian equivalent of a Grammy): New Group of the Year, Single of the Year and Rock Album of the Year. With a list of accolades this impressive the band is on the brink of engaging fans on a wider scale.

The Sheepdogs will do just that with the release of their new self-titled album, produced by The Black Keys’ Patrick Carney and Austin Scaggs, which will genuinely introduce them to the U.S. and beyond.

Hailing from the small Canadian town of Saskatoon, SK, The Sheepdogs won an international competition in 2011 securing them the cover of Rolling Stone, making the group the first unsigned band to appear on its front page. The win, decided by 1.5 million public votes, also scored them a record deal with Atlantic, which offered up a new EP from the band, Five Easy Pieces, in August 2011.

After the band was introduced to Carney at Petty Fest in New York last year, he immediately began offering ideas for The Sheepdogs next album (“He seemed strangely passionate about it,” Currie notes). The hope was that Carney could actually produce the album. In January, Carney invited the band to the studio, where they culled together old material and quickly began laying down new ideas.

“I think different albums have processes and this was a different experience for us, but that’s part of what makes it interesting,” Currie said. “We wanted to just go with the flow and make the album that represented where we are now. We were rushed into the studio, but you can let that pressure destroy you or you can let that pressure galvanize you, and I think it was a positive force. Having that tight time structure, buckling down and doing music all day every day was great.”

Although the band had only spent those two and a half weeks with Carney, Scaggs and studio engineer Roger Moutenot in Nashville’s Haptown Studios, the sessions proved fruitful. From the first single “The Way It Is,” a thumping, blues-tinged track, to rollicking stomper “Feeling Good,” the album embraces a vast range of influences, pulling in various styles and genres to create a collection of raucous, unabashed rock and roll numbers. A pensive reflection is threaded throughout, whether on mid-tempo acoustic track “Laid Back” or on pounding rocker “While We’re Young.”

“I think Patrick has a good sense of no bullshit,” Currie says. “A lot of making rock and roll is about cutting the fat and being a good filter. In the studio, he helped us refine the songs and found the best representation of each one possible. Plus, we wanted to be able to incorporate all different styles and I think our albums run the gamut.”

After touring steadily since 2006 and spending the last year entirely on the road with bands like Kings of Leon, John Fogerty and Robert Randolph & the Family Band, The Sheepdogs hoped to create songs that would lend themselves to their impassioned performances. The band, which has also performed at numerous festivals, including Coachella, Bonnaroo and SXSW, enlisted a keyboard player as the new album features a heavy dose of Hammond organ and Rhodes piano.

In the end it all ties back to the group’s goals, which essentially involve making really good rock songs, and you don’t need a crazy origin story to do that.

“Our goal is two-fold,” Currie says. “We want to make killer albums that people really want to listen to, but we also want to have a really reputable live show. When we come through town we want to be the hottest ticket there. Those two elements are what make a truly great rock and roll band. Really, though, we just want to play to anyone who is willing to give us a shot and who wants to have a good time.”

The show at Austin Music Hall on Thursday, March 14

9:55PM Fitz and The Tantrums