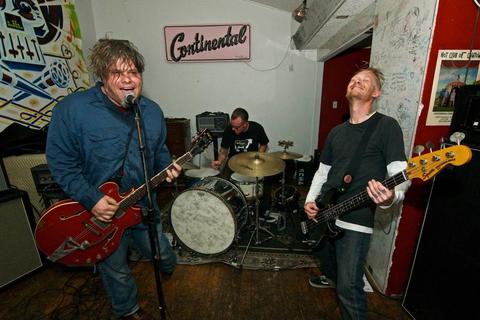 Listen to Stuck On You

The Jade Idol is a no-bullshit combo that takes classic early r&r/r&b influences straight to the garage; raw, loud, and honest.

Formed in 2009 and fronted by Bob Bleed, late of Milwaukee garage namesake Bleed, the band initially made it's mark as a two-piece ala Flat Duo Jets, with Mark Ford (Magnet School, Schatzi) on drums. Both well known in the international hot rod/custom car scene, the band found it's first fanbase through car shows and club parties.

Bob paid his dues on the infamous midwest garage rock circuit, sharing the stage with The White Stripes, Detroit Cobras, The Dirtbombs, The Oblivians and more. After a job brought him to Austin, he found a kindred musical spirit in co-worker and fellow hot rod builder Mark Ford.
Mark is a gifted musician, having played drums in Schatzi since 2000, and singing and playing guitar in heavy post-punk rockers Magnet School. His explosive style was the perfect foil for Bob's music.

After a few years as a duo, the band added John Speck, late of Detroit bands The Fags and The Paybacks, on bass. John spent years on the road and has a resume that includes tours with bands such as the Foo Fighters, Descendents and Rancid to name a few, records on A&M, RCA and Sire/WB, as well as numerous indie releases and session work.
An Austin resident the last 4 years, he elevates the band to another level in volume and attitude.

After releasing their first full length record "No Control" last year, the band is busy writing and recording for a 7-inch release this spring, and touring the US and Europe this summer.