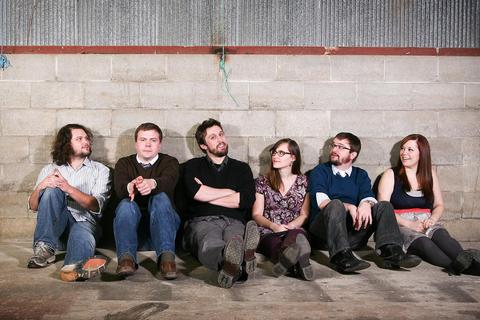 A folk band from the Crossroads of America, Yearbook Committee started as a recording project in a garage and quickly turned into a monster. A collective of sorts. No lead singer. No sole songwriter. Just a group of musicians with one common goal; to write, record, and perform music.

The sound: A lot of folk, with some of everything else thrown in there too. A whole lot of harmony.

We began playing live shows together in early 2009 and have since played SXSW three times in a row, Blues at the Crossroads Festival and MidPoint Music Festival, plus numerous shows in the Midwest. We released our first full-length album, Sing Till You Die, in 2010 as a sing-along mix-tape of songs and styles. Our second album was released in 2012, This is the Winter, which sounds exactly like an album from Indiana in February should.

We've been called “sonic experimenters” (Operation Every Band) and “an artistic endeavor devoid of ego” (Austin Fusion Magazine). We love what CityBeat (Cincinnati) said: “An instrument-switching, vocalist-rooting, everybody-writing sextet with a love of grassroots music and the people who love it back. Dig: The Innocence Mission and Steve Earle trade licks and whittling techniques on the universe's front porch.”

What makes Yearbook Committee different than any other projects we’ve been part of is the truly collaborative nature of each song and each show. We like each other. We laugh a lot. We trade off instruments, share songwriting and lead duties and aren’t afraid to experiment.

We’re proud that our fan base includes music snobs, six-year-olds and our grandmas. We’ve also found that there’s nothing better than starting an evening playing to strangers and ending it with a bar-wide singalong.

The show at Meduse Lounge on Friday, March 15

1:00AM The Dangerous Summer