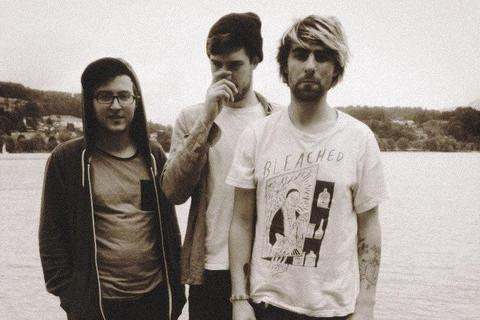 PAWS live in Glasgow, with members respectively from Tain (Highlands of Scotland), Edinburgh, and Glasgow. The band is made up of Philip, Joshua and Matthew.

Phillip first met Joshua at their high school in Tain, and the pair instantly bonded over an immeasurable love of punk rock. They were later introduced to third member, Matthew, by a close friend from Glasgow, Nick Anderson. Nick had been harbouring plans to start a band with Phillip and Josh, but found they were one bass player short. One night in Glasgow, Nick signed Matthew up un-knowingly to play bass in a band with Nick, Joshua and Phillip, who he hadn’t met yet. Days later, Matthew found himself driving through an icy winter wonderland, towards the snowy Highlands with his bass, and recording gear in tow, to meet the band in a log cabin.
The band took off after this initial meeting, and the four friends began to produce energy fuelled, Violent Femme-esque, anti-folk sounding music. After recording a batch of punchy recordings, under the moniker A Copenhagen Hope, the band played just a handful of small shows in venues and livings rooms around Glasgow in early ‘09. The shows were passionately colourful, jubilant and engaging. However, after this initial burst of creativity, Nick later decided to move on and work on new projects.

Bored and constantly jamming, the now 3 piece quickly found their feet and have been writing, recording, and playing live since as the newly named PAWS.

PAWS bash out infectious, lo-fi, garage pop-rock that can quickly shift from cute melancholia to an unnerving territorial roar. On top of the pulsating fuzzy noise the 3 piece produce, sit dreamy melodies that bare the bones of their author. Lyrical topics slide between sarcastic self-analysis and, onto more so than often, brutal home truths.

Their energetic live show highlights the dynamics in their music and lyrics,- Soft, warm, and comforting verses that lead you unknowingly into a vicious, claws out attack from the chorus. Their vibrant music and live performances have built up a strong history of audience interaction and participation.
Having recorded the majority of their releases from bedrooms/living rooms, the band hold a strong DIY ethic, and never spend too long on recording. So far they have released a couple of cassettes in small numbered runs, a split 7” single for Edinburgh based Gerry Loves Records, as well as their “Mermaid E.P” which was mastered by Bob Weston of Shellac.

PAWS have played a plethora of shows since their first gig in May 2010, which saw them open for Dum Dum Girls on a sold out bill at Glasgow’s Stereo Cafe.

Playing almost anywhere that they can fit their drums/guitar/bass/vocals into, notable venues have included: someone’s bathroom, a skate shop and even a ridiculously wet and windy performance on the top of an open roofed double decker bus. The band have also stormed through a summer run of Scottish Festivals, including very well attended performances at T in The Park, Belladrum, GoNorth, The Wickerman and a shared bill with the Buzzcocks at Loopallu Festival in Ullapool.

Phillip, Josh and Matt have also opened for transatlantic folks, falling under the same musical ethos, as they have passed through Glasgow and Edinburgh, such as No Age, Wavves, Happy Birthday, The Babies, Harlem, Ariel Pink’s Haunted Graffiti and Black Lips. They have also shared stages with a number of their British peers, Male Bonding, Milk Maid, Mazes, Wet Paint, Bronto Skylift, and Lady North to name a few.

Young and prolific, PAWS are keen to share their music with as many people as possible.

The spontaneous, quick footed and exuberant approach taken to writing, playing live and recording has led the band onto record sessions for both BBC Radio 1 as well as BBC 6.
2012 see’s PAWS release their debut L.P for Fat Cat Records, recorded and produced by Rory Attwell (Rory Brattwell).