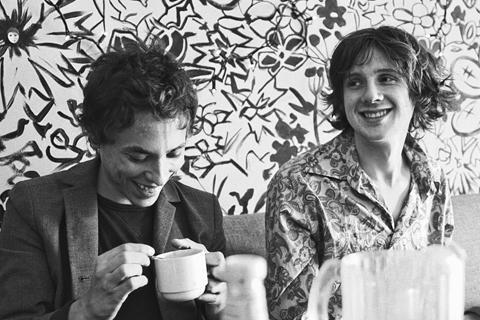 In May 2011, Foxygen's Sam France and Jonathan Rado nervously handed off a CD-R of their homemade mini-opus Take the Kids Off Broadway to producer and visionary Richard Swift after his performance in a Lower East Side club. The duo, who had just mixed and burned the disc that very night, had been devotees of Swift's outsider-pop oeuvre since high school, when they first began recording their own pubescent forays into oddball rock n' roll (At least a dozen records were finished before they graduated high school). Foxygen left the venue that night unsure whether Swift would truly listen or sling the disc into a dumpster on his way out. You're reading this right now because he did listen. In fact, Swift fucking flipped for Foxygen's bugged out, esoteric majesty and called upon them immediately to say as much.
Eight months later, Foxygen was holed up for a week-long recording session at Swift's neo-legendary National Freedom studio, creating what has become We Are the 21st Century Ambassadors of Peace & Magic, a precocious and cocksure joyride across California psychedelia with a burning, bursting punk rock engine. The songs were written in an inspired fury just after Take the Kids... was complete, pouring from their hands and mouths. Foxygen believes each song was a message of peace delivered from cosmic beings who used France and Rado as their messenger vessels. Some listeners may approximate with that old trope: "It's like listening to The Kinks on acid." But that doesn't exactly do it. The deeper truth might be that this is what The Kinks would be like if they themselves --the brothers Davies--dropped some blotter and struggled through a trip to lay down the follow-up to Arthur. Bubbling beneath their supreme melodic instincts, there's a wild, nervy energy and a raw musicianship that makes Foxygen incapable of doing anything exactly straight. And we wouldn't want it any other way. They somehow pack a host of musical left turns, lyrical non sequiturs and decades-spanning bridges into industry-prefered 3-4 minute gems that are at both reinvention and memorial. Don't call them the new young dudes on the scene. They're only new to you. They've been at this rock god thing since junior high.
In the same year as Scott McKenzie the singer of "San Francisco (Be Sure To Wear Flowers In Your Hair)" leaves this mortal coil, Foxygen delivers unto us the dandy Glockenspiel-packing "San Francisco," which both circumvents and dissects McKenzie's tune and its many cousins of the era. "I left my love in San Francisco/(That's okay, I was bored anyway)/I left my love in a field/(That's okay, I was born in LA)" goes the lovely call-and-response chorus, slamming together the archetypal flower children of the 60s and the archetypal ADHD vapidity of our recent generations. Another highlight, "Shuggie," manages to fit all the light bounce of the song's namesake and the climbing choruses of ELO into it's 3 minutes while still filling the tune with imagery of "rhinoceros-shaped earrings" and haunted parlors. Every nook and cranny of the record is loaded with their unflappable, brazen personalities. Foxygen takes "swagger," that as-of-late misused adjective, back once and for all. It's flipping pyramids old and new upside down -- from the miracle demo hand-off to their Richard Pryor-as-Jagger live shows to their singular idiosynchratic vision of rock n' roll.