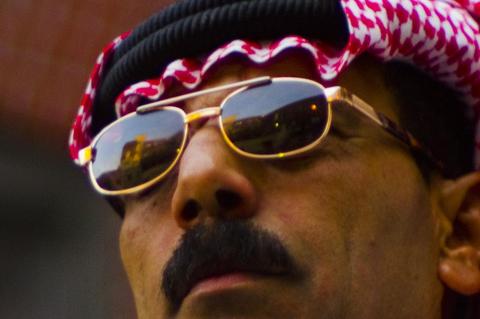 OMAR SOULEYMAN is a Syrian musical legend. Since 1994, he and his musicians have emerged as a staple of folk-pop throughout Syria, but until now they have remained little known outside of the country. To date, he has issued more than five-hundred studio and live-recorded cassette albums which are easily spotted in the shops of any Syrian city.

From rural Northeastern Syria, Omar began his musical career in 1994 with a small group of local collaborators that remain with him today. The myriad musical traditions of the region are evident in their music. Here, classical Arabic mawal-style vocalization gives way to high-octane Syrian Dabke (the regional folkloric dance and party music), Iraqi Choubi and a host of Arabic, Kurdish and Turkish styles, among others.

Together, they commonly perform the Ataba, a traditional form of folk poetry used in Dabke. Souleyman’s first hit in Syria was "Jani" (1996) which gained cassette-kiosk infamy and brought him recognition throughout the country. Over the years, his popularity has risen steadily and the group tirelessly performs concerts throughout Syria and abroad. Most notably Omar Souleyman has performed at Bonnaroo Festival, Montreal Jazz Festival, Hollywood Bowl, Summer Stage in New York, ATP Festivals, Bestival and Glastonburry Festival in the UK, SONAR in Spain, WOMADelaide, Perth International Festival and virtually every major and small city in the United States, Canada, UK, Europe and Australia.

Presented by: Our Heart Aches For Syria

Long Center for the Performing Arts

The show at Long Center for the Performing Arts on Friday, March 15