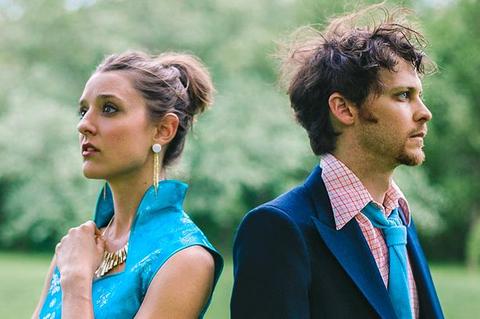 Band Bio
When future music historians look back at the strong currents circulating between the Americas in the 21st century, they will find Los Lobos, Calexico, and a charismatic, lanky Missourian singing tight harmony with a Southern belle rattling the jawbone of a donkey. David Wax and Suz Slezak form the artistic core of the David Wax Museum, and together with multi-instrumentalist Greg Glassman, fuse traditional Mexican folk with American roots and indie rock to create a Mexo-Americana aesthetic. Combining Latin rhythms, infectious melodies, and call-and-response hollering, DWM was hailed by TIME for its “virtuosic musical skill and virtuous harmonies” and has built a reputation among concertgoers all over the U.S, Canada, Europe and China for “kicking up a cloud of excitement with their high-energy border-crossing sensibility” (The New Yorker). With the release of Knock Knock Get Up (September 2012), David Wax Museum has reached a level of cross-cultural integration and musical fluency that allows them to speak electrifying and heartfelt poetry with a tongue that is wholly their own.

Knock Knock Get Up is a fiercely original, rhythmically undeniable love letter to the Museum’s growing global audience. It’s peppered with field recordings and natural sounds from the city of Santiago, Tuxtla in the Mexican state of Veracruz. From deep in sun-drenched southern Mexico where most of the album’s songs were conceived, the earliest version of Knock Knock Get Up traveled all the way to the frozen winter landscape of the Great North Sound Society in southern Maine. The album is the band’s second made in collaboration with producer Sam Kassirer (Josh Ritter), and was recorded in a month-long marathon at Kassirer’s rustic farmhouse studio in January 2012. The Wax Museum’s fourth LP is a mature and playful evolution of the band’s sound: classical Mexican strumming patterns are translated onto electric guitars sporting halos of fuzz; the leona, a deep-voiced traditional Mexican guitar plays licks like an old-time, stand-up bass; and the track “Vivian” was first written as a bluegrass hoedown before it grew a Caribbean inspired accordion hook and a Brazilian drum part in the studio. With an expanded musical palate of autoharps, organs and mariachi trumpet loops, Knock Knock Get Up is gritty, intoxicating and vibrantly lush.

David Wax Museum’s eclectic sound has deep roots in Mexican and American soil. On several trips south of the border, including a yearlong Harvard fellowship, David Wax has immersed himself in the country’s rich traditional music culture, son mexicano, learning from the form’s living masters. Suz Slezak was homeschooled by her father on a small farm in rural Virginia, and reared on music – old time, Irish, classical, and folk. The two met in 2007 and began blending their unique musical perspectives to form the band.

The bonfire of success David Wax Museum has kindled with its innovative, grass-roots approach is currently roaring. After years busking at house concerts and touring with The Avett Brothers, the Carolina Chocolate Drops, and the Old 97s, DWM picked up the 2010 Boston Music Awards Americana Artist of the Year. In 2011 they released their second album, the acclaimed Everything Is Saved. The album’s single “Born with a Broken Heart” won the BMA’s Song of the Year. But critical mass came with the band’s breakout performance at the 2010 Newport Folk Festival, an opportunity won by DWM fans in an online competition. NPR called their concert at Newport a highlight of the entire weekend, Bob Boilen of All Songs Considered filed their sound under “pure, irresistible joy”, and the Museum was invited back to Newport to play the 2011 main stage. With an illustration in The New Yorker, #8 on Paste Magazine’s list of the Best Live Acts of 2011, and a nod from TIME magazine as one of the top ten acts of 2011’s South by Southwest, David Wax Museum has become one of the hottest new indie bands around.

The show at Victorian Room at The Driskill on Saturday, March 16