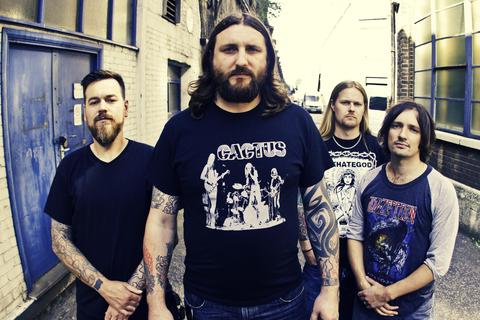 Heavy Metal is not just about music: it's a way of life, a motivating mind-set, a positive force and an inspirational belief system. It's the most exciting, life-affirming noise that exists on this planet of ours, and London's indestructible masters of the furious form are Orange Goblin. Not just the UK's reigning champions of balls-out, party-starting, booze-fuelled metal, but one of the very best live rock bands of all time, the mighty Goblin have been a permanent and universally admired fixture on the British metal circuit for the past 17 years. And now they're back, with ‘A Eulogy for the Damned', their seventh and best studio album. A thunderous tour-de-force of gargantuan riffs, subterranean rumble and electrifying energy, it is the album the band have been threatening to make since they first crawled, with crumpled beer cans in hand, from the grubby Soho shadows back in the mid-90s.

Inspired by the gods of hard rock, heavy metal, punk rock and underground extremity, from Sabbath, Motörhead and Thin Lizzy through to Celtic Frost, Danzig and Black Flag, Orange Goblin were initially seen as major contenders amid the mid-90s stoner rock explosion, but it soon became apparent that this band had much more up their collective wizard's sleeve than red-eyed boogie and flapping flares. In fact, over the course of their roller coaster career, the band have proved themselves to be one of the most consistent and persistent forces in modern heavy music, amassing a catalogue of albums that rivals anything released during the same period. From the rambunctious, heads-down exuberance of their Frequencies From Planet Ten debut in 1997 through to the multi-genre bonfire of insanities that was 2007's Healing Through Fire, Orange Goblin have always kicked arse, always written songs that hit home like a stage diver's boot connecting with your forehead, always delivered the rampaging heavy metal goods while meaning every last riff, beat, solo and bellow.

But it is as a live band that Orange Goblin have founded their formidable reputation. Long renowned as skilled crowd-pleasers and party masters, the band have toured all over the world and shared stages with countless big names, including Alice Cooper, Black Sabbath, Sex Pistols, Down, Queens Of The Stone Age, Dio, Monster Magnet and many more. They have headlined sell-out shows at New York's revered CBGB's, Los Angeles' notorious Troubadour and the legendary Underworld in Camden, London. They have also blown fields full of minds at such prestigious festivals as Sonisphere, Download, Hellfest, Bloodstock Open Air, Roadburn, Dynamo, Maryland Death Fest and High Voltage. An Orange Goblin show is a guaranteed good time…all you need to do is get the beers in, prepare your neck muscles for maximum punishment and surrender to the sound of a grand heavy metal institution letting rip at full throttle.

A lean, mean hard rocking' machine…the eight-legged tag team of frontman Ben Ward, bassist Martyn Millard, guitarist Joe Hoare and drummer Chris Turner have reached a new peak of creativity and one-two-fuck-you intensity on 'A Eulogy For The Damned'. This is the album that deftly encapsulates everything that is exhilarating and admirable about this most dedicated and humble of British metal wrecking crews and that deserves to propel Orange Goblin to the front of the British metal queue. They're back and the party is starting all over again. Whose round is it??

“It has to be said that Orange Goblin shows are very predictable….you know they are going to be brilliant before they even hit the stage!” – Terry Bezer (Kerrang!)

“Consistently one of the greatest live bands the UK has produced in recent decades!” – Dom Lawson (Metal Hammer)