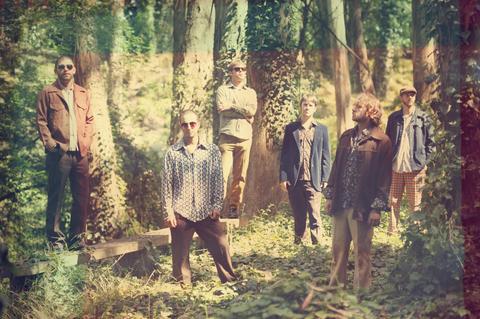 Psychedelic Soul, sometimes called black Rock, is a sub-genre of Soul music, which mixes the characteristics of Soul with Psychedelic Rock. It came to prominence in the late 1960s and continued into the 1970s, playing a major role in the development of Soul and Funk music.
Over the past seven years, Monophonics have staked their claim as one of the west coast’s premier bands. Raised amid the Bay Area's rich musical culture, Monophonics has proudly carried on the tradition of music native to their hometown, which flourished during the birth of funk music and psychedelia.
Monophonics were formed in 2005; originally an instrumental ensemble, in the last 2 years they have come to find there own sound. The foundation is the blistering funky drums of Austin Bohlman and soulful bass playing of Myles O’Mahony, fuzzy echo guitars by Ian McDonald, a powerhouse horn section made up of Ryan Scott & Alex Baky and the swirling organ & dynamic vocals of Kelly Finnigan. The result is a psychedelic soul & heavy funk sound, which harkens back to the styling of the late 60’s and early 70’s, all while keeping its feet planted in the present.
As a mainstay of Bay Area venues such as The Independent, Great American Music Hall & Sweetwater Music Hall the Monophonics created a national buzz and fervent worldwide following. With 2012 being a break out year playing over 150 shows in 7 different countries. Sharing the stage & bill with such names as Al Green, Budos Band, Rodriguez, Orgone, Galactic, Edward Sharp & The Magnetic Zeros, Dennis Coffey, Syl Johnson, Soulive and many more. Their touring schedule has brought their rowdy, hard-hitting, energetic live set to 40 States from Hawaii to Motown, NYC and down to NOLA and gained them a reputation as one of the best new live touring acts. In the past year the band also performed at some of the major music festivals in the world including Wakarusa Music Fest, Portland Waterfront Blues Fest, Telluride Blues and Brews, Ottawa Blues Fest and both International Jazz Fests in Victoria and Vancouver.
Besides being given major kudos for their live energy and stage show, the sound of their new record has gotten them a lot of attention. Produced and recorded by Finnigan & McDonald and recorded on an old Tascam eight-track 1/4” tape machine at The Soul Barracks in San Francisco. The LP drips with warm tones, a gritty rawness in performance and spontaneous songwriting rarely found since the golden days of FAME and Stax Records. The vibe, production and overall tone of the record has gotten compared to the best products by Daptone Studios in NY and Killion Sound in LA. This is the Monophonics sound and it is a welcomed by soul, funk and lo-fi heads worldwide. In 2012 Monophonics followed up their highly regarded 45/single “Like Yesterday” off Colemine Records with their third and best record to date entitled “In Your Brain” off the well known rare groove imprint Ubiquity Records. The critically acclaimed record is considered one of the best soul and funk releases of 2012 even gaining them a radio hit in Greece with their cover of Sonny Bono’s “Bang Bang”. The full length has the vibe and the sound of the late 60’s/early 70’s. Dark psych soul, heavy funk, top notch songwriting, analog tones and renowned production, which is a sonic testimony to the evolution of this six-piece unit.

Looking ahead at the future, the band is scheduling a limited edition 6 song cover EP in the winter, another full length LP in the summer time, more US, Canada and Europe shows plus festivals with the hope of exploring new markets like South America, Japan & Australia. Besides being busy with their own movement, the band has become in demand working and collaborating with lots of other respected groups and artists like Motown singer Ben l’Oncel Soul , Multi instrumental producer Shawn Lee, Hip Hop group Blackalicious and world famous DJ Kenny Dope. With all those things happening, there is no sign of slowing down in 2013 and beyond!

The show at Meduse Lounge on Thursday, March 14