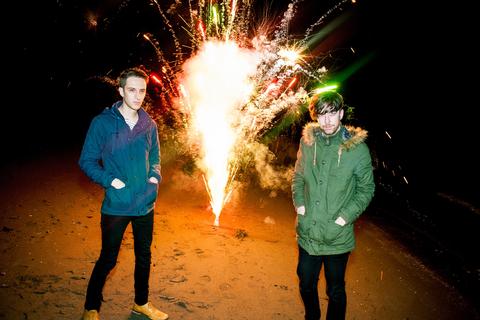 The feline theme running through the debut album of band Fine Times is an apt metaphor for grace. However, the band wasn’t always as light-footed as they are now...

When Matthew Moldowan and Jeffrey Josiah Powell let the name expire on their previous act, they walked away from an outfi¬t that never got past the grand planning stage despite a great record and the approval of critics.

When the two regrouped in 2010, the whole idea was to be as nimble as possible—and voila, by 2011, they were in the Warehouse studio working on the bed tracks for their debut album on Light Organ Records.

“We scrambled. It really happened all of sudden,” says Moldowan, explaining that producer Howard Redekopp opened a small window, and they jumped in. It seemed a little reckless, but the gamble paid off. Redekopp added his trademark vintage synths into the record as Moldowan and Powell con¬fidently pounded out their pop sounds. It came to be a perfect fi¬t.

Moldowan modestly admits he cannot stray away from a hook when he says, “I have a short attention span so if a record doesn’t catch me in the fi¬rst listen or two, I probably won’t put it back on the record player.”

However, it is unbelievable that the heart-melting bridge in “High Brow Low Times” was constructed to simply aid a short attention span. Laying down a grand procession like “Lions” or devising the wall-of sounds in “Hey Judas” is not just conjured up without having precision for your craft.

And you don’t generally get to collaborate with Howard Redekopp, who is something of a local legend, thanks to his work with the New Pornographers, Tegan & Sara, and Mother Mother, among others.

Redekopp completes the Fine Times picture with a sound that’s becoming his signature; a crisp but extra-wide miracle that brings a ringing of clarity, brightness and warmth to the record, even when a cloud of white noise engulfs the last minute of “High Brow Low Times.”

“There are sleigh bells and chimes and 18 tracks of guitars all doing different things, and you can’t really hear specifi¬c things, but you know that what’s happening is musical…” says Moldowan about the track, although there’s nothing on this luscious, stately pop record that’s any less ear-bending.

From the snakey Elvis Costello power pop of “Television Tel Aviv,” to the 80’s-tinged rhythms of “And It Happened At Midnight,” each track on this debut album could be labeled a “single.” If there’s a lineage of sophisticated, lovingly crafted pop that stretches from Phil Spector, through Roxy Music, to Phoenix and MGMT, then Fine Times is sitting somewhere near the end of it — only cat-shaped.

The show at Maggie Mae's on Friday, March 15