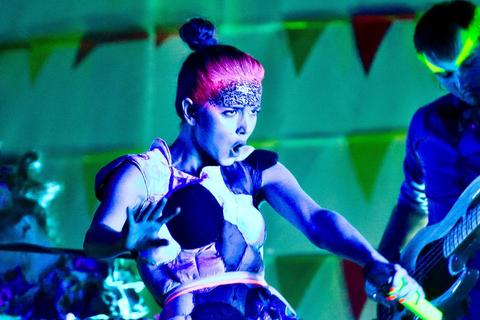 Monika Brodka, the sprite‐like vocalist BRODKA, launched onto the Polish music scene with a bang as the winner of Polish Pop Idol in 2004 at the young age of 16. Since her debut, Brodka has released three LPs ‐ all of which received critical acclaim and garnered a huge fan base in Poland for the star.
Brodka’s first album, mature for a teenager, amazed audiences with its sensitivity and fresh approach to pop music ‐ but also proved that Brodka has an incredible voice. Brodka’s second album, released two years later, also reached ‘Golden Record’ status.
The singer’s latest LP, Granda, came after a break in music‐making and a conscious decision to change directions. Granda shows a more experienced, worldly and experimental side to Brodka. The music ‐ hard to define but showing folk, electronic and experimental traits, with a pop background ‐ was produced and co‐composed by Bartosz Dziedzic.
Granda has reached double platinum status, proving that this bold, new style Brodka has embraced was a smart move. Both Brodka and Dziedzic received acclaim for their work and were nominated for dozens of awards, including the SuperHiro Magazine Award (won), Gala’s Rose (won), Polityka Passport. Poland’s Phonographic Academy nominated Brodka for 10 Fryderyki awards (the most important awards in Polish music business), and the singer won 4 for Best Female Vocalist, Best Pop Album, Best Music Production, Best Music Video in 2011.
Since the release of Granda, Brodka has been touring with her band all over Poland. They played over 60 concerts and are currently preparing to tour the LAX EP and the EP’s single, Varsovie, is already Poland’s number 1 track in iTunes.
Besides music, Brodka’s other passions include photography and fashion, proven by the fact that, at age 24, she is already considered an icon by Poland’s fashion magazines. Brodka, hailing from the Silesian town of Zywiec, known for it’s folk‐music roots and determined inhabitants, is proving over and over again that she sets high goals and rises to the challenge of meeting them. Her latest venture into singing in English only serves to show that Brodka is constantly developing ‐ both personally and musically ‐ and her sales and concert attendance prove that she has staying‐power.