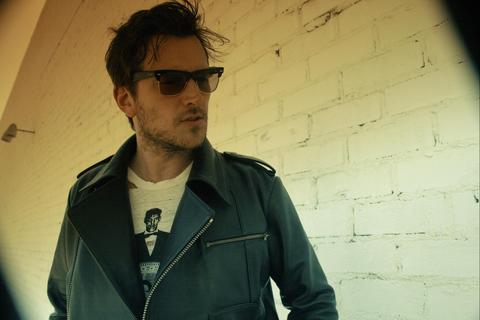 I've been doing these things for so long now, that I feel like just when I have written the mother of all things informative and maybe funny, I go and record a new record. Why does shit always have to evolve and the information change every time another year goes by? Why, since the last bio (which I felt was an understated masterpiece) did I have to go and do shit to deem it necessary for an update?

Just because between the last album, I Liked it Better When You Had No Heart and now, I have: shot a video for "Pretty Melody" from the album ILIBWYHNH, wore a TV on my head in it and fought ninjas, got it featured on YouTube and it got a half million views, did a sold out headlining tour of the states last year, supported Train on a sold out tour of the states, then went and supported Pink on a sold out stadium tour of Europe all summer, including sold out headlining club shows of our own over there.

Hmmm... What else.. Oh! Taylor Swift heard a little version I did of her song, "I Liked it Better When You Belonged With Me" (or was it "You Belong With Me"? I can't freaking remember...). She called me and asked if she could play my version of it on the Grammys and would I mind playing along side her and Stevie Nicks for the performance. Then she fell in love with me and ran away to Barcelona to elope, only to find out that while I was in the bathroom at the airport, she fell in love with Jake Gyllenhaal, who stole my fucking seat next to her in the waiting terminal.... Ok... I made that last part up. Fun right? No? Ok.. Like the fans are always telling me, don't talk about politics, religious views or Tay Tay Swift.

I should mention the band I play in. Just like the last record, this record was recorded, written and produced by me and the Black Widows. It consist of my longtime bandmates, Chris Unck on guitar, lap and pedal steel. He's a redneck from the North Georgia mountains who I think wrestled alligators at one time, and built lighthouses. He also fronted Chris Unck and the Black Roses.. Until I stole him. Fran Capitanelli on lead guitar is also a friend of mine that resided in Atlanta during my tenure there, and he played guitar and sang lead in a band I loved called The Tom Collins. Until I stole him. He is the Professor of Energy.... Ask him to explain. Jake Sinclair on bass is not only the tallest, skinniest bassist I know, but he's also the best. He's even better than me, and I'm fucking awesome. I met Jake while producing a record for his band The Films.... Until I stole him. I bartered with him though. I told him he could also engineer the records I make in my studio with me (he's also the best engineer I know) and that his singer/songwriter in the Films, Mike Trent, would have to join in on the Black Widows writing process. I kinda made out good on this whole deal, because Mike is one of the most unsung singer/songwriters I know, and the lyrical collaborations we have done on the last couple of records have been my favorites. Oh yeah, Mike's wife (Cary Ann Hearst) is also an amazing singer/songwriter that I produced a record for last year.... She sang backup vocals on the new Widows record. It's a family affair...

So this is the part of the bio where I'm supposed to describe the new record by us called The Spade. I'm supposed to inject words about the songs like "soaring", "pounding", "climactic", and maybe even a "unrivaled"...... But I just can't talk like that about my own music. But what I can say is, just like my bass paying skills..... It's fucking awesome. we will be on the road this year a lot, and probably sleeping at many KOA campgrounds this fall. More than likely, you are reading this because you don't know shit about me and you are about to interview me for your school paper or local radio station visit (yes, I'm in the lobby) and you need to find out a few things about me to talk about. It's ok. I'm not mad. I'm not very popular and I don't blame you if you "just aren't into the music". You may not have read this far, or been able to get past the bass playing part, but if you have, then I commend you. Let's talk....