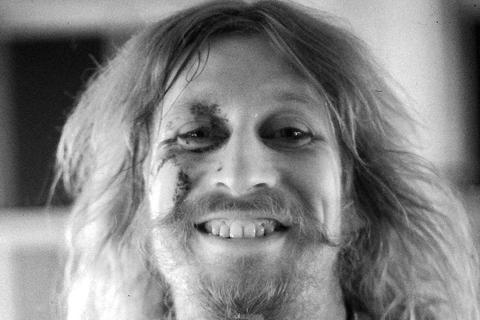 Turner was born in Oxford in August 1940 to a theatrical family, although his father was working in a munitions factory. At the age of 13 his family moved to the Kent seaside resort of Margate where he would work at the local funfair during the summer holiday season, befriending another seasonal worker Robert Calvert. His first influences were Rock and Roll and the films of James Dean.[1]
He went on to complete an engineering course and then undertook one voyage in the Merchant Navy. He then set about travelling around Europe picking up menial jobs, and it was during a stint as a roustabout in a travelling music circus in 1967 that he made the acquaintance of Dave Brock in Haarlem, Netherlands.[1]
He had two years of clarinet and saxophone lessons in the early 1960s but never considered himself good enough to pursue it seriously.[2] However, whilst travelling around Europe he encountered some free jazz players in Berlin who impressed upon him the importance of expression over technical proficiency, and it was then that he decided that what he "wanted to do was play free jazz in a rock band".[1]
[edit]1969-76 and 1982-84: Hawkwind

Main article: Hawkwind
Turner, owning a van, had originally offered his services as a roadie to the newly formed Hawkwind. However, when the band discovered his passion for the saxophone he was offered a position in the band to add to the overall weirdness of their sound.[3]
Of his playing, Turner admitted that "it's the overall feel rather than the individual parts of the music that we're interested in. I don't have any illusions about my technical ability. I tend to use it as an electronic medium rather than an instrument".[4] He became an active and vocal member of the band, pulling in friends such as Dik Mik, Calvert and Barney Bubbles, and involving the band in community and charity projects, sometimes to the chagrin of the others.[1]
“ We wanted to play the Windsor Sex Olympics but only half the band turned up. ”
NME - September 1972[5]
He was a member of the band during their most commercially successful and critically acclaimed period, writing or co-writing some of their most popular songs such as "Brainstorm" and "Master of the Universe". However, complaints about his playing over other members of the band despite numerous requests to modify his behaviour eventually led to his dismissal in November 1976.[6]
In 1982 during the recording of Choose Your Masques, Brock invited Turner to the recording sessions and he was asked to front the band for the album's tour. Turner's second stint in the band lasted just over 2 years and although some live albums and videos were released, the band did not undertake any studio recording. At the end of 1984 while preparing material for the The Chronicle of the Black Sword album, he was sacked once again.[7]
[edit]1977-86: Sphynx and Inner City Unit

Main article: Inner City Unit
After leaving Hawkwind the first time, Turner holidayed in Egypt and while visiting the Great Pyramid of Giza he was given three hours inside the King's Chamber to record some flute music. On returning to England, Steve Hillage cleaned up the tapes and assembled the Sphynx band featuring Hawkwind's Alan Powell, Gong's Mike Howlett and Tim Blake, and Harry Williamson to record music augmenting the original flute tracks while Turner adapted lyrics from the Egyptian Book of the Dead. The album was released as Xitintoday on Charisma records in 1978 and the band toured, played festivals including Deeply Vale Festivals (later released as a CD), Glastonbury Festival (part of which was broadcast BBC television) and his own themed Bohemian Love-In all day festival at the Roundhouse.
With Williamson he conceived the "Nuclear Waste" single featuring many of the Sphynx musicians and a lead vocal by Sting. He then guested on the album Fairy Tales by Williamson and Gilli Smyth's project Mother Gong, and out of this he, Mo Vicarage and Ermanno Ghisio-Erba (a.k.a. Dino Ferari) formed Inner City Unit (ICU) with Trev Thoms and Dead Fred. Thoms and Ghisio-Erba had previously played together in Steve Took's Horns who had played their only gig at the Bohemian Love-In. The Horns were managed by Tony Landau, a friend of Turner's since adolescence, and were fronted by former Tyrannosaurus Rex percussionist Steve Peregrin Took, who would later make guest lead vocal appearances with ICU alongside his former Horns bandmates.[8][9][10] Inner City Unit recorded the albums Pass Out and Maximum Effect before collapsing due to certain members drug problems. Turner and Dead Fred had stints in Hawkwind before regrouping to release the albums New Anatomy, The President Tapes and the EP Blood and Bone.
[edit]1987-99

Turner's next project was Nik Turner's Fantastic All Stars, a sax and Hammond organ driven jazz and rhythm and blues band. They gigged for several years, eventually releasing the album Kubanno Kickasso!.[11]
Turner and Twink got together for some impromptu live performances under the name Pinkwind, two CDs of which were released on Twink's own record label without the permission of Turner.
In 1993 Turner was approached by Pressurehed and Helios Creed to record another version of his Sphynx project using the original flute tracks, resulting in the album Sphynx. This partnership then developed further, regularly touring in the US performing a set of Hawkwind-centred material sometimes featuring Genesis P-Orridge, Jello Biafra and former Hawkwind members Simon House, Del Dettmar and Powell. One studio album Prophets of Time was released in 1994 followed by the live CD and DVD Space Ritual 1994 Live and another live CD Past or Future? in 1996. Out of this set of musicians formed the band Anubian Lights, centred around Len Del Rio and Tommy Greñas from Pressurehed with contributions from Turner, Dettmar and House, as did the band Spiral Realms centred around House and Rio.
[edit]2000-present

Main article: Space Ritual (band)
On 21 October 2000 at the Brixton Academy a 'Hawkestra' event took place, featuring nearly all past members of Hawkwind. Disagreements between various participants led to any restaging of the event being unlikely, but Turner did stage a further event under the banner 'The Greasy Truckers Party featuring members of the Hawkestra' on 21 October 2001 at the London Astoria. Out of this a loose band formed, performing further gigs and eventually using the name xhawkwind.com. An appearance at Guilfest in 2002 led to confusion as to whether this actually was Hawkwind, sufficiently irking Brock into taking legal action to prohibit Turner from trading under the name Hawkwind, a case which Turner lost.[6] The band settled on the name Space Ritual and are still currently active.
Turner has resurrected another version of Inner City Unit with Thoms, performing irregular gigs.[12] He also fronts the "psychedelic latino-funk" band Galaktikos.[13] He continues to attend festivals playing and guesting whenever possible and is an eager contributor to other band's projects, such as recording an album and touring with US space rockers Spaceseed in 2004,[14] and live appearances with UK dance outfit Akahum [15] at BGG Shareholders Party & HEADS Haiti Benefit show. Living in Carmarthen, he often busks playing his saxophone in Cardiff city centre during weekend nights.[6]
After playing at "Hawkfan Festival" in Hamburg in 1997 and the Space And Rock Festival - Rocksjon, Jonkoping, Sweden in 1998 with the Finnish space rock group Dark Sun, they moved to play at Tavastia Club, Helsinki, Finland. This resulted in the live album, Ice Ritual, which was released in 2000.
Turner also provided flute for Dodson And Fogg, a folk rock project released in 2012,
After a chance meeting with Mr H a Welsh Jazz/Blues singer songwriter at Brecon Jazz festival 2012 where Turner and Mr H performed a free improvised Jazz session and Mr H invited Turner to feature on his 4th album titled l'histoire tragique.In October 2012 Turner entered Berryhill studios in Monmouthshire and Performed an improvised alto sax session on Seven of Mr H's compositions which is to be released in the spring of 2013.

The show at Rebels Honky Tonk on Friday, March 15