Warren Hood and The Goods 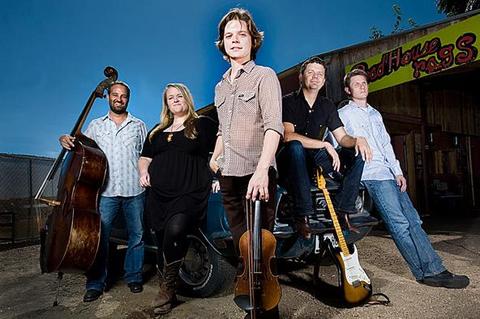 Warren Hood is an accomplished musician who plays violin, fiddle, mandolin, and composes and sings as well. He lives in Austin, Texas and performs with his local band, Warren Hood and the Hoodlums, in a blend of jazz/blues/newgrass acoustic fusion of music, on Sundays @ Momo's. In the 2005 Austin Chronicle Best Musician Awards, Warren was voted #1-Best String Player and his band was voted 2nd in the bluegrass category, by the Austin readers of this entertainment weekly.

Warren is the fiddler for the Waybacks, a San Francisco based acoustic/Americana "all-terrain" band that tours regularly around the country and is fast gaining notoriety. Click here for their touring schedule to see if they are playing a gig soon near you. Click here to visit their MySpace website - where you can download and listen to songs from live shows and their latest album.

Warren began playing fiddle at age 11 and studied classical violin for a number of years. At age 17 he won the Austin Youth Award and performed as soloist with the Austin Symphony. Later he honed his playing and singer/composition abilities with his former bands such as: Warren Hood & his Allstar Band, Blue Light Special and the South Austin Jug Band. Warren graduated from Berklee School of Music, excelling @ his craft, where he prior to graduation won the "String Achievement Award" - Berklee's highest honor, as selected by the faculty. The award is for those students "who as leaders in their field, will make a mark on the future of music."

Warren's musical influences range from Ray Charles, Stephane Grapelli, Walter Hyatt and Uncle Walt's Band to his dad, Champ Hood. If you listen to Warren's compositions, the soulful then gypsyesque "Black Cat" instrumental on his 2008 self released CD - "Warren Hood" (Good Dinner Music), you will truly experience the talent of this instrumentalist. Also, if you enjoy the style of Uncle Walt's Band ballads, Warren's composition and vocal on his songs "Savannah" or "World Revolves" are quite, simply-remarkable.

Warren sings, composes and plays violin, fiddle, mandolin and guitar. His main violin is a year 2000 custom-made instrument from the William Lee Company of Chicago.

Warren's father, Champ Hood (Uncle Walt's Band) was a big influence on Warren from an early age. Champ was the sideman for many years for Toni Price at Austin's famed Continental Club Tuesday Hippie Hour. Warren used to sit in with Toni Price, along with his cousin - Marshall Hood, at the Toni's Hippy Tuesday show and delighted a new generation of Hood fans. Champ once said, "I don't know where he gets that gypsy thing," remarking about Warren's (who played alongside him a few times) favorite music key - Gypsy G. "He's so good, it's spooky." - Contenders website