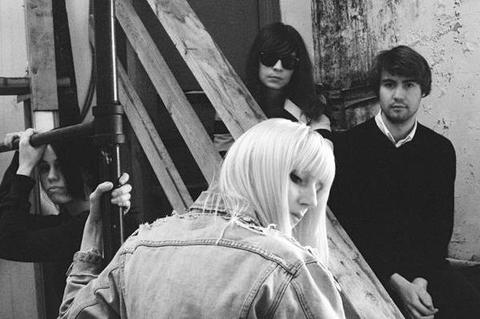 Listen to Take The Mirror

White Lung is a punk band from Vancouver, B.C. compromised of Mish Way (vocals), Grady Mackintosh (bass), Kenneth William (guitar) and Anne-Marie Vassiliou (drums). They have released four 7-inches Local Garbage (2007), Magazines (2008), Atlanta (2010) and a self-titled Europe-exclusive on German label Sabotage Records (2012), as well as two LPs It’s The Evil (2010) and Sorry (2012). Their debut LP It’s The Evil received critical acclaim from Maximum Rock n’ Roll, Razor Cake, CHARTAttack and was named Best Punk Record Of The Year by Exclaim! magazine. This year, they released their sophomore effort Sorry to even more praise from SPIN, Pitchfork, Bitch, Pop Matters, PunkNews, amongst many others commending mostly on the band’s unique yet classic approach to punk rock. BLARE magazine named the single “Take The Mirror” one of the best songs of the summer while many critics have added Sorry to their forthcoming Top Records lists for the end of the year. The band has toured the US and Canada extensively and embarked on their first Europe/UK tour in fall of 2012.

“White Lung comes in, unleashes a couple minutes of post-hardcore brutality, and then retreats before the listener has become totally exhausted or bored.” – Consequence of Sound

“Sorry exists in a comfortable middle-ground between abrasive and poppy, and never commit too heavily to either side. The manic energy is uncontained and angry, at times, but always led on a straight path by the pure exuberance and bounciness of the record.” – Sputnik Music

Melodic as it is Sorry also has few discernible pop-music touch points, displaying White Lung’s ability to craft bizarre yet accessible songs. This, pals, is how a punk rock record should sound in 2012. - Fast Forward Weekly

“Sorry is a visceral piece of work and it has a sense of feelings and opinions being spat out in an attempt to try and exorcise something that is gnawing away deep within Way. It will be in my top 10 at the end of the year.” – Punk News