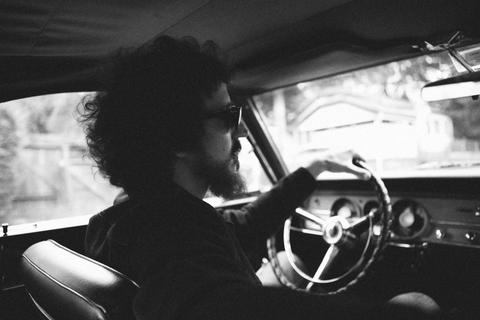 How does the story start and where will it end? Re-birth and re-discovery have been common themes to describe the inside psyche of Matt Drenik’s Battleme. 3 years ago Drenik was the lead singer of Austin, TX based psyche rock band, Lions. They had just released their first record in the UK and were touring with a reunited Monster Magnet. Then he got sick. And fought. And now, his solo project, Battleme, is finding an audience. It all began with a haunting cover of Neil Young’s “Hey Hey, My My” for FX’s Sons of Anarchy. A week after its digital release, Drenik’s Battleme found itself in the Itunes Top 20 charts. A few months later, he cut a record with Ghostland Observatory’s Thomas Turner and the single “Touch” premiered on MTV Buzzworthy. Soon after others followed. The Atlantic, RCRD LBL, and MTV Hive quickly featured the track and the Washington Post claimed it as being “a career maker.” Within a few months of the record’s release, Drenik had formed a fledging new live band in Portland, OR. First it was a KEXP in-studio session, then an appearance at Seattle’s Capitol Hill Block Party. A west coast tour followed with an appearance at LA’s Lobster Fest. The album track “Shoot the Noise” was picked to soundtrack the upcoming EA Sports NHL 13 video game. And Battleme’s first headlining Portland date was recently previewed by the Willamette Weekly as, “...a continuous string of battles and triumphs. And they’re pretty damn good.” This is only the beginning.

Growing up in the Cincinnati suburbs with two older brothers, Matt Drenik was always influenced by his environment. One brother was in a noise band, the other with a keen taking towards New Wave. “You had the Jesus Lizard in one room and The The in the other. I was just a kid. I didn’t understand the difference between the two.” While he didn’t understand the differences, these would be key stepping stones in his evolution.

Battleme really began in 2009 on accident when Drenik was diagnosed with uvetis, an auto immune disease that affects the eyes of which there is no known cause or cure. At the time of his diagnosis, Matt was coming off of four years recording and touring with Lions who exploded noise and energy – touring nationally and internationally with the likes of the Toadies, Local H, and Blue Cheer. Fans gravitated towards their raucous live shows as spectacles of Drenik’s heavy state of mind.

After he got sick, things began to change. “It was time to go somewhere else.” He dove back in to the things he grew up on. The Stones, Flaming Lips, Beck, Townes Van Zandt went running through the walls and Drenik wrote. He turned his thoughts to songwriting. He asked, “what would Bob Pollard do?” This was where his voice started to change. “I wanted something different. And I didn’t have anyone telling me what rules I had to go by.”

Drenik moved to Portland, OR in the summer of 2010. He spent the next several months recording over 40 songs in his girlfriend’s basement, bending from one genre to the next. He eventually narrowed them down to an 11 song record. After burning a few CDs for friends, Thomas Turner from Ghostland Observatory got a copy and responded. Drenik thought Turner might offer him a show with Ghostland. Instead, Turner asked to produce the record and put it out on his print, Trashy Moped Recordings.

For months, the two lived and breathed the songs. They sent mixes back and forth, collaborating on every aspect. Drenik’s songs took on new forms – powerful hooks, bottom heavy grooves, and ethereal textures blended effortlessly with drifting, falsetto vocals. It created an adventurous mix of post-modern rock and soul that would come to define the record. Synthesizers generate “Touch.” A solitary guitar builds into a wall on “Trouble.” The cosmic call to kill the quiet in “Wire” gives way to the sweet satisfaction of a “Killer High.” Genres coalesce, dividing lines disappear, and Battleme allows the sounds to create their own field of vision. A view from the other side.

And now Battleme, residing in Portland, OR is figuring out just what to do.