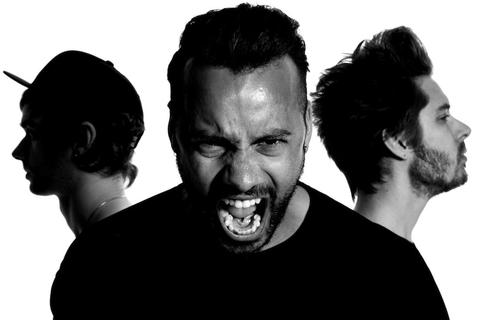 "This is modern Dubstep/Bass music, whatever you want to call it, done aggressively and soulfully and it's done with real class, style and songwriting." - Skrillex

MONSTA have been described as having the melodic synth thrum of Flux Pavilion, the tech-soul vocal drops of Moby and the reverberant snares of trip hop act U.N.K.L.E -but their sound is largely instrument-based and it was Skrillex who found them. The trio (producers Rocky and Rufio and vocalist Skaar) will release their first EP on the electronic dance music (EDM) star's indie imprint OWSLA this Autumn.
"I was at South by Southwest with my manager Tim [Smith] and a few friends," says Skrillex. "Tim says, 'I got something,' and pulls up [MONSTA's ‘Holdin' On’]. I said, 'That's a sick track and a cool vocal sample. Where'd they get that from? Is that Aretha Franklin?'’ But it wasn't a sample. It was Skaar's powerfully androgynous performance of an original song written and recorded by the group.

‘Holdin' On’ has all the makings of a radio hit-not only an irresistible vocal hook, but a complete verse-chorus-verse song structure. The EP boasts remixes from electronic music’s finest; Dillon Francis, Alvin Risk and even though he has turned down requests from the worlds biggest stars, Skrillex has cleared his schedule to put his mark on the EP with an exclusive remix too (his last one won him a Grammy Award), teaming up for the first time with non other than Nero for the occasion! "This is not your typical dubstep. A lot of that has already become cliché," he says. "This is next-level."

Signed to the same management stable as Chase & Status, Knife Party and Sub Focus and remixing for artists such as Zedd, Labrinth and Skylar Grey; MONSTA have been played by Zane Lowe on Radio 1 as his ‘Next Hype’ and ‘Hottest Record In The World’ and featured by the likes of NME, Rolling Stone, Dancing Astronaut, Vibe, Village Voice, Hypetrack and included in Billboard magazine’s albums for Summer 2012, ‘40 Hottest Releases’. MONSTA are becoming a regular feature on the club and festival circuit, having already wowed crowds at Camden Crawl, Wireless and Isle of Wight Festival and have been personally invited by Xfm’s Eddy Temple Morris to play a coveted slot at this years sold out Secret Garden Party. Their debut video has been premiered in the US by MTV and Mixmag in the UK- MTV describing it as their ‘most popular premier of the year.’

“As heavy in bass as it is high on life.” Zane Lowe

“His vocals are so raw and so pristine he can just walk up to any mic…. he just sounds like fucking angels are singing." Skrillex

"The EP proves that the trio is no one-hit wonder, but rather a musical force to be reckoned with." Electro

The show at Republic Live on Thursday, March 14