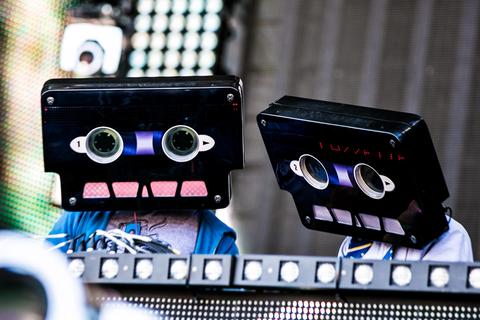 From the house that brought you Avicii, comes Cazzette. The Swedish DJ duo is currently tearing up clubs worldwide with “Beam Me Up (Kill Mode),” a club banger with a hard-charging kick drum, an epic vocal track and dub bass drops designed to get the party going. They have been on the rise since making a huge splash in 2011 with their official remix of Avicii’s “Sweet Dreams,” which they then followed up with an official remix of Swedish House Mafia’s “Save the World”. EDM luminaries like David Guetta, Tiësto, Thomas Gold and Martin Solveig have lined up to give their support to the talented dub house duo who are readying their first album release for November 2012.

Cazzette is the newest project from manager/visionary Ash Pournouri, who brought Avicii to the top of the music world. Cazette, 23-year-old Alexander Björklund and 19-year old Sebastian Furrer, incorporate a variety of sounds into their dub house tracks, including aspects of trance, hip-hop and funk. “We do whatever we want but we must have that house and dub step sound in it,” says Sebastian.

Cazzette have had a huge 2012, playing world class venues like Ushuaia in Ibiza, Radio City Music Hall, Lavo, Mansion in Miami, XS and Surrender in Las Vegas, Zouk in Singapore, and the main stage at festivals like Ultra, Tomorrowland, Creamfields, and Beyond Wonderland. They will bring their seamless melding of house music and dub step elements to an even bigger American audience during their first U.S. tour kicking off later this year.

Alexander and Sebastian both grew up on Sweden’s west coast, an hour away from another, near the city of Gothenburg. “People think we are brothers,” jokes Alex, “We are bros, not brothers!”

They didn’t meet until they were teenagers, but they share similar stories. They both were introduced to electronic music by their fathers. Alex’s father would blast European techno while speeding around Sweden with Alex in the passenger seat of his car, and Sebastian’s father was a prolific DJ in Rome, Italy. “He was always telling me: ‘listen to this, listen to this, while he played trance music,” says Sebastian.

In high school, Alex practiced on turn tables and fell in love with performing in front of an audience. Forgoing traditional instruments, he found his true calling at his keyboard. “When I found out you could actually create music with your computer by just downloading a program, I was hooked instantly,” he says. His production ability developed and his music tastes changed, and he soon found his passion in house music.

Sebastian knew he wanted to become a musician, but couldn’t connect with the guitar or the drums. At age 14, he discovered a program on his father’s computer called Apple Studio. “It was just natural for me.”

Sebastian began by producing techno beats. He found Alex on MySpace and added him on instant messenger. “I messaged him like, ‘oh dude, you rule!’ He was already good back then.” Alex told him that techno was over – house was the new thing and gave him some advice about house beats. They went nearly two years without talking again. But Sebastian got back in touch – and this time, he had skills. “I had been practicing all day, all night, and I said to Alex: ‘listen to this.’ And he was like, ‘oh wow! This is really good!’” “It was really good!” says Alex.

They decided to start working together, and the two formed an easy partnership. “We just had such great work flow,” says Alex. “We really couldn’t deny that we had some connection because we made 10 tracks in the first month. Everything just clicked.”

After working together, Sebastian came up with the idea to contact Ash Pournouri of At Night Management, the man behind the electro sensation Avicii. Once Pournouri got involved, electronic magic was made. “He liked us and picked us up, and then suddenly we were touring with Avicii!” says Sebastian. The boys consider Pournouri a vital part of their success. “It’s great to be three brains,” says Alex. “Before it was just the two of us, and clearly we were missing something. Together with his help we just all made a project we really enjoy working on.”

With At Night at their back, the ‘bros’ have created some of the hottest tracks of the past year. Cazzette's music is ever-changing, and the boys refuse to stop evolving. With an album and a US tour fast approaching, Cazzette is poised to become a major force in electronic music.