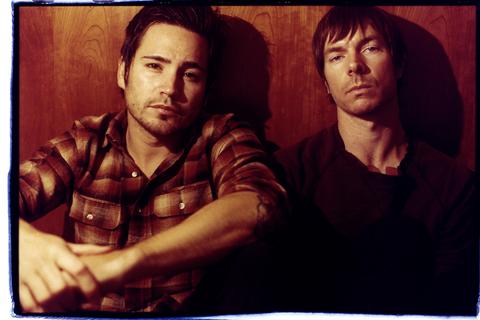 The path to success is rarely short or simple to traverse. It takes time to get where you’re going, and it’s usually the journey there that transforms you into what you will become. Middle Class Rut is proof of this. Theirs has not been an easy path, but their journey has defined who they are now. The group’s two members, Sean Stockham and Zack Lopez, have been playing together since they were teenagers, camping out in Zack’s mom’s house in Sacramento to write and record the songs they wrote. The duo’s first band, Leisure, dissolved in early 2003 after a few false starts, sending Zack to work construction and Sean to labor as a studio runner in LA. But they soon realized stopping wasn’t an option. Sean moved back to Sacramento and Zack began driving up every weekend from LA to write and rehearse music. After a year of commuting up and down the California coast, Zack relocated as well, solidifying a future for the pair’s new band, Middle Class Rut. The band has spent the past five years crafting new songs and allowing the style and sound of their project to evolve and establish itself. The pair records every song they write together almost immediately in their rehearsal space, capturing the instantaneous spirit of a track while still in the moment. This means that each number is imbued with a distinct sense of urgency, almost like a snapshot of the moment of inspiration. The band’s debut LP, No Name No Color, is a collection of these recordings, which they elected to use rather than attempt to recreate the spark of the original tracks later in a studio. “Recording our own music has been a part of our process since we were 13,” Sean explains. “It integrated itself into our process from an early age. We like being able to listen to whatever we’re writing right away. It’s like when you look in the mirror you’re seeing your face but it’s different than when you see a picture of yourself. It’s the same with music. You need to hear it come out of a stereo to understand it. That’s just what we do. We write music and we record it so we can listen to it. Now hopefully other people will get to listen to it as well.” The record compiles 12 songs from a span of several years, showcasing a breadth of time without ever losing its clear impression of cohesion. A few tracks have appeared previously on the band’s three EPs, which they released in 2007, 2008 and 2009, but the album as a whole is a new construction that reveals a band with a unique creative process. The majority of the songs have been tested on the road during tours in the U.S. with Alice in Chains, Social Distortion, and Them Crooked Vultures, and in Europe with Linkin Park, The Bronx and …And You Will Know Us By The Trail Of Dead. Middle Class Rut’s music artfully toes the line between heavy and melodic, showcasing the band’s skill for raw, energized rock and roll that is equally complex and immediate. The record is enormous and rowdy, propelled by the duo’s ability to make heavy music tasteful and accessible. The record sounds the product of far more people than the two who made it.

Zack and Sean’s hard work has paid off. No Name No Color hit 22 on Billboard’s Heatseeker chart, and “New Low,” the first single off the album, cracked the top 5 on the alt chart. Meanwhile, the band’s video for “Busy Bein’ Born,” single number two, debuted in the Elite 8 on MTV and the song appears in the top 30 on the alt chart with a bullet.
“It takes everything this band does and puts it into one song,” Zack says about “Busy Bein’ Born.” “It’s hard to do that. We were able to capture the heavier and mellower side of our music in one song.” Releasing this album marks a moment of catharsis for these two musicians. The road they’ve traveled to get here has been long and uphill. But never has Middle Class Rut lost sight of why they make music—a fact that is reflected in the genuine, honest nature of their songs. There is something grounded and relatable about these tracks and that comes from the band being homegrown and independent, and truly loving being musicians. “I feel like the music we make needs to be heard,” Zack says. “Maybe everyone feels that way about their music, I don’t know. We struggled for a long time to find something that was us and as soon as we decided that we would do it ourselves everything clicked. Realizing we didn’t need anyone but ourselves to do this was important for this band. Now we want to get this out there and really get our own audience for our music.”
The band followed up the success of No Name No Color with the release of the “Hurricane” 10-inch vinyl in July 2011 featuring the band’s resplendent cover of Bob Dylan’s “Hurricane” with exclusive acoustic live versions of “New Low” and “Dead Set” (recorded at Maida Vale Studios and XFM Studios respectively) as b-sides.

The show at Mohawk Outdoor on Wednesday, March 13

8:30PM Iggy And The Stooges