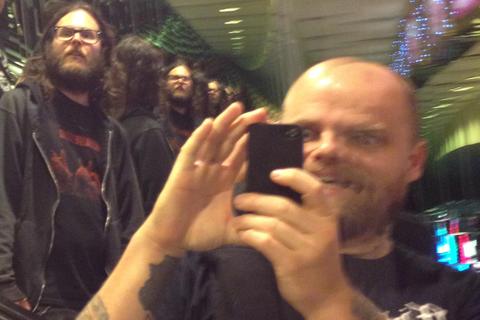 Seriously, I am not sure what these guys are up to. They tell me nothing for weeks and then expect me to write a last minute bio that will capture yankee attentions. Those guys...!

Iron Lung are two moody, bearded guys from Seattle who play a kind of music called “power violence”. Pioneered in the early 90s, this genre of punk was a kick in the ass for the joke of what hardcore had become thanks to snowboarding, metalcore bands who sang about “revenge” and girls not being allowed to have abortions.

Bands like Infest and Crossed Out and labels like Slap A Ham put out fast, brutal records that sounded closer to fast old punk like Siege than Biohazard and it made everything feel exciting again.

A decade on and Iron Lung are reigniting our interest in power violence by making some of the harshest, most exciting stuff we’ve heard since we first fell in love with Man Is The Bastard. They have songs with names like “Sternal Abnormalities” and “Horizontal Respiration” and the sound of them makes me dream of grabbing an enemy by the back of his head and smashing his face repeatedly into a desk until he’s begging for mercy and crying through broken teeth.

About to release their third album of "music" entitled "White Glove Test" on their own imprint, Iron Lung Records, Iron Lung plan to use their upcoming success to win beauty pageants and end world hunger. They are very serious. Also, they promise to use the bathroom both before and after giving concerts.

For further information go to lifeironlungdeath.blogspot.com or listen at ironlungpv.bandcamp.com

Thank you and have a good day.

Presented by: Chaos In Tejas