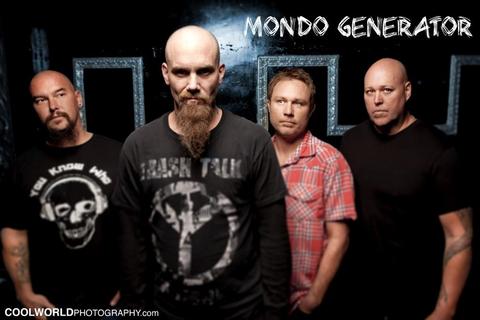 Mondo Generator started in 1997, before frontman Nick Oliveri joined Queens Of The Stone Age. After hooking up with former Kyuss guitarist Josh Homme to form QOTSA, he put Mondo on ice until 2000, when Southern Lord released their debut album, 'Cocaine Rodeo'. With it's sludgy Black Flag-esque riffs, it was a superb slice of underground rock and roll. Mondo Generator went back into hibernation until 2002, when Nick resurrected the band. Band members have included, Dave Grohl, Josh Homme, Twiggy Ramirez, Dave Catching, the list goes on and... They have since toured the world and have just released their 4th album, "Hell comes to your Heart!" Mondo just wrapped up a US tour in support of the new album and are working on their next European tour. In the meantime, they are headed to Austin, Texas, for some heavy SXSW Rock N Roll action!!