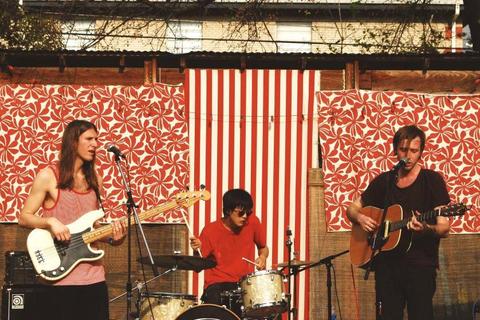 "Adrienne Rich may be one of the more influential figures in contemporary American poetry, but until Martin Crane of the Austin band Brazos fell under the spell of her poem "The Observer," she's never been known as an indie-rock muse. An unusual lynchpin to Brazos' 2009 album, Phosphorescent Blues, Rich's poem, with its exotic images and violent intimations, vibrates against Crane's principal obsessions: urban alienation, curative friendships and the absolute freedom of youthful imagination. With a sound somewhere between the jazz-rock fusions of Tim Buckley and the freaked-out folk of Neutral Milk Hotel — all stacked acoustic guitars, impetuous percussion and meandering pianos — Brazos dares listeners to dip into a bracing, deep and sometimes turbulent stream of consciousness." - Riverfront Times