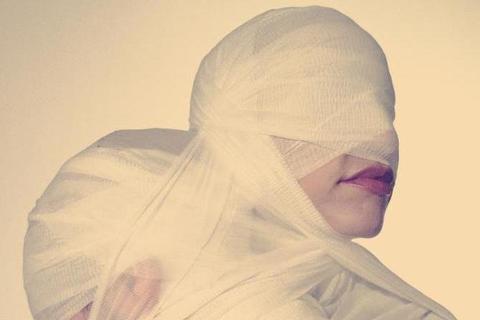 Bestial Mouths formed in Los Angeles, California in 2009. Drawing from a large base of influences including the early industrial, synthpunk, and goth scenes of the late 70’s and early 80’s, founders Lynette Cerezo and Christopher Myrick sought to explore new imagery in creating an original aesthetic that avoided some of the cliches typically prevalent in “dark” music. The band currently consists of Gustavo Aldana (synthesizers and programming) and Jessica Reuter (drums) in addition to Cerezo (vocals) and Myrick (synthesizers). Throughout 2011 and 2012 the band toured extensively across the U.S. including performances at SXSW and New York City’s Weird Records party before embarking on a 12 date tour of Europe. Having released their debut LP “Hissing Veils” on DAIS Records they are currently working on several recordings for upcoming releases including a Desire Records split with fellow Southern California band Deathday, a record produced by David Psutka of Egyptrixx to be available through DAIS Records and a second full length LP to be released with Clan Destined Records.

The show at Soho Lounge on Friday, March 15