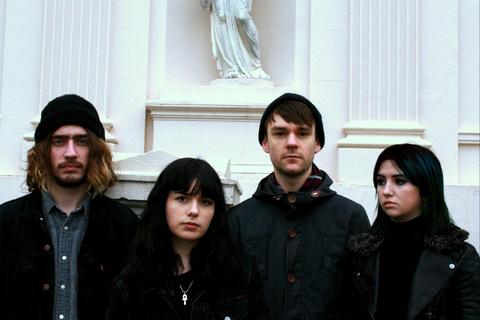 Fear of Men was born when Jess (Vocals+ Guitar) had been writing and home recording ambient songs as soundtracks to short films and Daniel (Guitar) attended an exhibition of her work. The two began swapping mixtapes and started a project based on a shared love of melody and an eclectic mix of artists such as Eric's Trip, Grouper, Daniel Johnston, The Pixies and The Chills. The early demos that resulted from this collaboration created the ‘Hanna Shygulla Demos’, released by Sex Is Disgusting in February 2011, before the band’s debut 7”, ‘Ritual Confession’, was released on Italian Beach Babes in August of that year. Before the year’s end the band self-released the ‘Alice Munro Demos’, which featured the acclaimed track ‘Doldrums’. Joining Jess and Daniel in the group are Robyn on bass and Mike on drums. 2012 has seen the band release acclaimed singles ‘Green Sea’ with Sex Beat and ‘Mosaic’ with Too Pure. As well as playing with Best Coast, Lotus Plaza, Purity Ring, Pains OF Being Pure At Heart and Mac DeMarco.