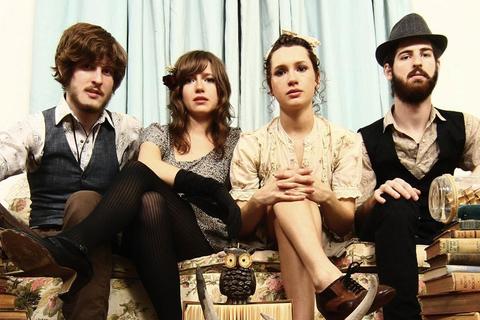 The Vespers are one of those lucky young bands that have built an extensive underground following simply through word of mouth and heavy touring. The band is uniquely made up of two sibling duos; the Cryar sisters, and the Jones brothers. The four have distinguished their sound with an arsenal of acoustic instruments and harmonies only siblings can create. Their showmanship generates a roller coaster of sight, sound, and emotion and their inherent chemistry and instrumental versatility continues to set them apart.

The band has independently released two full-length records and left a reputable impression on both Americana and Christian audiences. They have toured over 30 states in their short 3 years, playing all different environments from colleges and festivals to listening rooms and theaters. The Vespers will make their first venture to the west coast this fall.

“The Vespers are on the verge of breaking through” -Huffington Post

“The Vespers are the band to watch” – AOL The Boot

The show at St David's Bethell Hall on Saturday, March 16