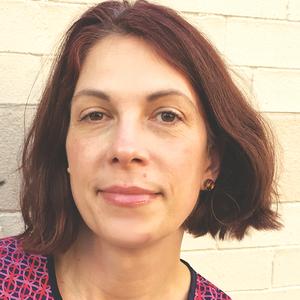 Illya, a writer, artist, director and creative producer, is a practicing physician who has cared for inmates at Rikers Island Correctional Facility for the past five years. Her creative partner is Cyril Tsiboulski, co-founder of Cloudred, an interactive design studio. Together they create interactive, richly collaborative, cross-disciplinary projects. In 2018, Queerskins: a love story, a VR experience, was exhibited in site-specific interactive physical installations world-wide including at The Victoria and Albert Museum, London. Queerskins: ARK (2020), their second VR experience, co-produced by Intel Studios premiered at The Venice International Film Festival in an interactive virtual installation Queerskins: HOME, on VRChat, the social VR platform. In My Own Skin (2021), a virtual "village" housing original photographs and featuring wearable avatars premiered at CPH:DOX. In 2021, the Oregon Shakespeare Festival commissioned them to work with choreographer Raja Feather Kelly to help create his first VR performance work. Currently, they are developing FLY ANGEL SOUL, a 2D experimental short film shot entirely in VR, in a virtual mis-en-scene that will be used as a performance tool to shoot variations live, in real-time before an audience with guest cinematographer/filmmakers. This project is supported by the Jerome Foundation. They have received grants from The Sundance Institute andThe Tribeca Film Institute /MacArthur Foundation and have been awarded a Peabody Futures of Media Award and Columbia University Digital Storytelling Lab's Special Jury Prize.

This is Not a Person Part 2 at Fairmont Manchester B

This is Not a Person Part 2 at Fairmont Manchester B