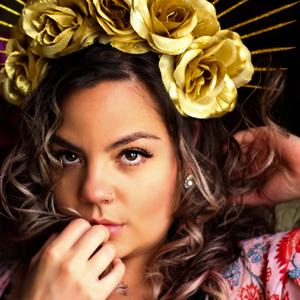 Described as spiritual and sensual, Genie Santiago is a musician, poet, visual artist, community collaborator, and healer based out of Boston. Emerging from rough beginnings, her art draws from her experience growing up as a poor, Queer Latina and a survivor of sexual abuse. Her life and identity have inspired her mission to use her art to empower others to overcome trauma, decolonize the mind, promote sexual freedom, and stray from the ideals of self-hatred that society places upon us. Genie uses her art and platform to amplify the needs of BIPOC, LGBTQIA+, and marginalized voices of her community.

In 2019 came the release of "Spirit Party", a song meant to connect the sexual and spiritual realms while raising consciousness towards the importance of self-intimacy, meditation, and health. In 2020, during a pandemic and revolution, Genie released the socio-political single "Revelación". The song is a universal cry for racial justice, an uprising against white supremacy, and a demand to decolonize. In 2021, Genie released her first full-length album “Inner Space”. Journalist Victoria Wasylak quotes, “Inner Space crushes cycles of abuse, prejudice, sexual assault, and trauma under its heel in the most peaceful way possible — with poetic patience and love.” In collaboration with The Boston Foundation LAB Grant and The Museum of Science, Genie was able to curate a fully accessible, free, and immersive album release experience for her beloved community at the Charles Hayden Planetarium at the Museum of Science.

She has opened for acts Lupe Fiasco, BIA, and sang alongside grammy nominated artist Son Little during his tour stop in Boston. Genie also created the "Sunflower Series” in 2018 to showcase the work of Boston based performers and help create intimate bonds between audience and performer. She is the co-owner and Director of Performing Arts at Creatives of Color Boston, an organization that creates opportunities and visibility for MA based BIPOC artists. "We are