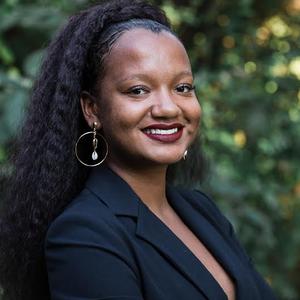 Kimiya Factory 23, (She/her) graduated from the University of Texas at San Antonio with a Bachelor's of Arts in Political Science and a minor in Legal Studies.

While Leading/Co-Founding the movement #ChangeRapeCulture, Factory challenges Title IX policies regarding structural violence and sexual misconduct at institutions across San Antonio, Texas. She continues to advocate for Reproductive Justice as a National Speaker for Planned Parenthood.

Factory serves as the President/Executive Director of Black Freedom Factory - an organization that encourages Data-Driven Activism, #RedefiningProfessionalism for BIPOC LGBTQIA+ Communities/youth, and dismantling racial inequity across the State of Texas. Factory is actively working alongside advocates nationwide on issues concerning Voting Rights, Police Accountability, and the School-to-Prison Pipeline in the interest of grassroots efforts for vulnerable populations. Factory is also a Participatory Action Research Fellow for Southwest Folklife Alliance and Identifies as a Queer Indigenous Afro-Latina. She is a recurring political commentator for CNN, MSNBC, ABC News, The Grio and has been featured in The New York Times as well as local Texas news media.

Twentysomethings: The Next Generation of Nonprofit Leaders at Hilton Austin Downtown Salon B

Twentysomethings: The Next Generation of Nonprofit Leaders at Hilton Austin Downtown Salon B