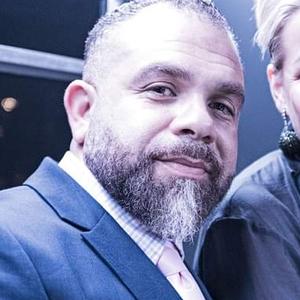 Born in Passaic, New Jersey with New York City in his sightline, Sin took advantage of his proximity by sneaking, at the age of 13, into Manhattan and hanging out at clubs like The Building, Mars, Red Zone, Disco 2000 and the original Sound Factory on West 27th Street. A self-made man, Sin is the driving force behind his own success. He is a song writer, producer, re-mixer and an international DJ that has spun in well known venues is major cities such as: New York City, Miami, Chicago, Montreal, Beijing, Hong Kong, Rio de Janeiro, Shanghai, Tokyo, Singapore, Bangkok, Rome, and Vienna. He entered the studio, writing, producing and arranging records under several labels including Sony, Universal, Warner, Virgin Records and BMG Entertainment. He signed his world-wide music publishing deal with one of the most powerful music companies in the world. Warner/Chappell Music, where he was working directly with Patrick Conseil (VP of the International and Creative division), Rick Shoemaker (then the Senior Vice President, Creative) and Les Bider (Chairman and CEO Warner/Chappell to develop his talents and increase his catalogue.

S. Morera was co-writer on projects such as “Kiss All The Bullies Goodbye, featuring Taylor Dayne,” that was produced by world renown DJ/Producer Paul Oakenfold, and the record “Watching You” for budding artist Christina that achieved Gold Record status in Europe. Of his many accomplishments Sin is proudest of his connection to the Lifeball. Being pulled in personally by Gery Keszler, CEO and Founder of the Lifeball Organization, which creates one of the largest AIDS charity events in the world, the Ball’s goal is to raise donations for important AIDs projects, bring awareness and fight against the taboo status of HIV/AIDS in our society. It is a cause that is very close to his heart. Each year, the LifeBall attracts tens of thousands of visitors as well as 500 National and International media representatives to Vienne’s City Hall Square, where everybody can experience the 2-hour show live and for free. Not allowing this serious background to be forgotten, thought-provoking moments during the Opening Ceremony at the City Hall Square and moving speeches by international AIDS activists make for the necessary awareness raising. President Bill Clinton, Sir Elton John, Sharon Stone, Milla Jovovich, Whoopi Goldberg, Brooke Shields, Linda Evangelista, Eva Longoria, Catherine Deneuve, Janet Jackson, Liza Minelli, Ricky Martin, Katy Perry, Natalia Kills, Adam Lambert, Anastacia, Kylie Minoque and Conchita Wurst are but a small portion of notable personalities that were in attendance.