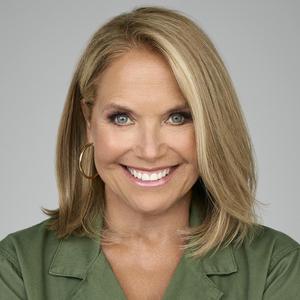 Katie Couric (@katiecouric) is an award-winning journalist and #1 New York Times best-selling author of her memoir, Going There, which was published in October 2021. She is also a co-founder of Stand Up To Cancer (SU2C). Since its launch in 2008, Stand Up To Cancer has raised more than $700 million to support cutting-edge collaborative science and its research has contributed to nine new FDA approved therapies.
In 2017, she founded Katie Couric Media (KCM), which has developed a number of media projects, including a daily newsletter, a podcast, digital video series and several documentaries. KCM works with purpose driven brands to create premium content that addresses important social issues like gender equality, environmental sustainability and mental health.
Previous documentaries produced by KCM include: America Inside Out with Katie Couric, a six-part series for National Geographic; Gender Revolution: A Journey with Katie Couric, for National Geographic; Under the Gun, which aired on EPIX; and Fed Up, available on iTunes, Amazon and YouTube. Couric was also the executive producer of Unbelievable on Netflix and is developing other scripted projects.
Couric was the first woman to solo anchor a network evening newscast, serving as anchor and managing editor of the CBS Evening News from 2006 to 2011 following 15-years as co-anchor of NBC’s Today show. She also hosted a syndicated show and served as the Yahoo Global News Anchor until 2017.
She has won a duPont-Columbia, a Peabody, two Edward R. Murrows, a Walter Cronkite Award, and multiple Emmys. She was twice named one of Time magazine’s 100 most influential people and was a Glamour Magazine woman of the year three times. She has also received numerous awards for her cancer advocacy work; honored by both the Harvard and Columbia schools of public health, the American Cancer Society and The American Association of Cancer Researchers.
In addition to Going There, Couric is also the author of two children’s books and The Best Advice I Ever Got: Lessons from Extraordinary Lives.

Listen to Katie Couric and other SXSW speakers on Audible

Gene Editing: The Biotech Revolution of our Times

Gene Editing: The Biotech Revolution of our Times