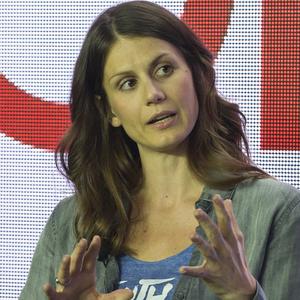 Carolyn DeWitt is the President and Executive Director of Rock the Vote, the largest national
organization focused on building long-term political power for this country’s most diverse youth
generation. During her tenure, she has overseen Rock the Vote’s resurgence, launching
innovative partnerships with youth brands, developing cutting-edge technology, intensifying its
fight for voting rights and moving the organization toward an issue-first approach with targeted
outreach to marginalized communities across the country.
Carolyn is a national advocate for young people, featured in publications and outlets such as
CNN, MSNBC, Fox Business, Hill TV, The Washington Post, The New York Times, Teen
Vogue, and Billboard. Today, Rock the Vote is a powerhouse for mobilizing youth through
effective and timely civic education resources, innovative programs that meet young people
wherever they are, and authentic messaging through trusted partners to ensure young voters
understand and use their political power.
Prior to leading Rock the Vote, Carolyn was the chief of staff for a national political
communications firm and coordinated a national satellite media operation. On the local level,
Carolyn worked as the chief of staff for public service office in Chicago and as the deputy
campaign manager and finance director for Chicago’s 25th Ward Regular Democratic
Organization. In her work abroad, Carolyn researched the end of apartheid and subsequent
building of a democratic state in South Africa, served as a senior international advisor
collaborating with a youth political movement in Madagascar, and participated in the
Constitution of Kenya Review Commission.
Carolyn brings a cross-disciplinary and impact-oriented approach, with experience and
background in consulting imperiled companies and leveraging technology to provide therapy to
children with special needs in less developed countries. She is a strong believer in the blending
of new and old tactics and the power of technology to break down barriers and accelerate
widespread change.
Carolyn is a Michigander where earned her BA in International and African Studies and Political
Science from Kalamazoo College. She is also a triathlete, marathoner, and fierce advocate for
her staff and young people across the globe. She also sits on the board of Coworker.org.

Election 2020: On the Front Lines of Youth Culture