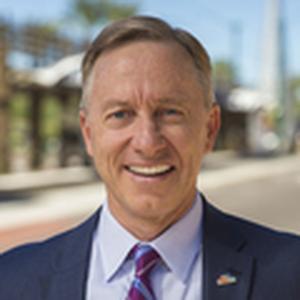 John Giles was elected the 40th Mayor of Mesa, Arizona in August, 2014. He was re-elected in August 2016 and began his first full four-year term in January 2017. Mayor Giles is committed to taking Mesa to the next level with his NextMesa vision.

Mayor Giles has overseen a growing economy that added thousands of new jobs, new employers like Apple and Textron Aviation and over $1.5 billion in new capital investment. He is bringing renewed focus and attention to Mesa’s downtown resulting in a budding creative economy with new businesses, education and entertainment options.

Giles is a proud member of the Mayor’s Challenge to End Veterans Homelessness. Mesa's program has housed more than 120 homeless vets.

Recognizing these efforts and more, Money.com, a subsidiary of Time Magazine, named Mesa the best big city in the Southwest.

Born and raised in Mesa, Mayor Giles earned degrees from Brigham Young University in Political Science and Arizona State University’s Sandra Day O’Connor College of Law and has managed his own law firm in downtown Mesa for more than 20 years. Mayor Giles is an active marathoner and triathlete who has completed two full Ironman competitions, 20 marathons and four Boston Marathons. Mayor Giles and his wife Dawn have been married for more than thirty years. They have five children and eight grandchildren.