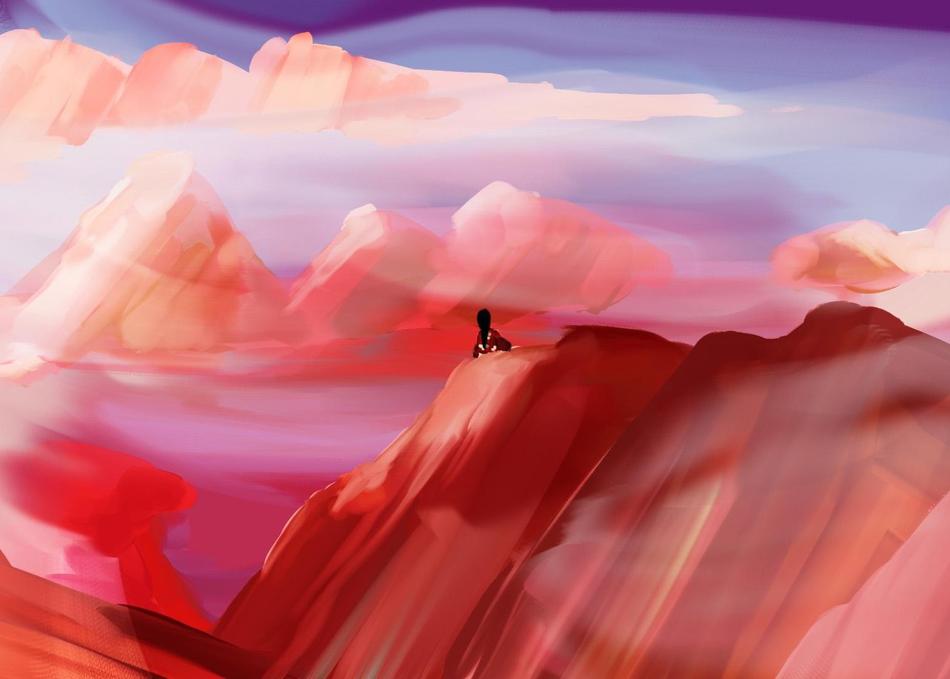 The story opens with a prophetic dream a mother has: her daughter will be born in the year of the rooster. She excitedly awaits taking her daughter to a Zhua Zhou place, where newborn children pick up special objects that predict their fates and strengths. When her daughter picks up an object that hits too close to home, the mother can’t help but intervene. For long enough, things continued smoothly and according to the mother’s wishes, but inevitably, life-changing choices created pockets of strife between the two. In the end, when the daughter finally questions her mother’s motives, she receives an unexpected answer.

A teenager is enjoying pieces of modern art at a gallery until, Scott Kelly, another teenager engages in a conversation with him. They go back and forth about the meaning and legitimacy of each piece as they make their way through the gallery, as Scott Kelly doesn't believe there isn't any meaning in the works at all.

A Walk Along the Stars

"A Walk Along The Stars" is an animation and archival home footage I made in the memory of my grandmother. She said she saw the stars in her dreams, and she believed, more than anything, that she would be reunited with them when she passed. Recently, my family bought and rebuilt my grandmother's house, and I had a hard time adjusting because I had so many memories there. I made this film to work through and express everything that I was feeling. I wanted to share the experience through a simple child-like animation style because I was a lot younger when I lost my grandmother. The themes of loss and grief I hope are ultimately outshone by the themes of hope and love.

This documentary is a real look into the two stories of women who came to America in search of the American dream despite all the struggles and challenges they face, especially the legal ones. They share their hopes and dreams for their children as they try to combat the current negative climate they face being immigrants. All they want is a better life for their family.

"Unveiled" is a short documentary told from the perspective of two teenage, Muslim girls who seek to shatter the false reputation and connotation that the hijab carries in Western society. While the media often demeans Muslim women by recognizing the hijab as an oppressive force, the girls ultimately UNVEIL the truth that the media often overlooks.

Joseph, a teenage student, attempts to handle the stresses of school, a girl, and the bully of his class. Unfortunately, these distressing matters cause him to experience a terrifying event in his sleep.

Matthew, the main character, is a kid whose life is boring and drab. The only thing that keeps him entertained is by laughing at the misfortunes of others. He meets a girl, Vivian, who challenges him in an exciting way and leads him to steal the car of a unpopular high school jock. While having the time of their life taking the car for a spin they get pulled over by a cop and Matthew attacks the cop so that Vivian can get away. This leads Matthew to be sent to juvenile detention where Matthew's life goes back to the way it was but he receives a picture from Vivian of them in the car and then realizes she was the best thing that happened to him.

This is found footage which takes place in a mental institution in El Salvador. It is a story of a mental health patient who struggles with multiple personality disorder. This footage contains the interview of the patient and her psychiatrist who is trying to get the bottom of the horrific murder of her parents. He gets more than he bargains for.

Chrys, the bitchy girl in class, befriends a young girl named Karmen. She sees Karmen is having troubles and decides to help her. While Karmen is standoffish, she allows Chrys to breakdown her walls and saves her from this hell she has been living.

"Lucky Girl" is an experimental music video that plays with gender conventions through striking iconography, production design, and color. We aim to show girls as both dangerous and innocent, playful yet melancholy. Our mode of expression is closer to pure cinema than narrative. We hope that this provokes audiences, but also entertains.

Rated B for Black

This experimental film embodies some of the representations of black people that the media and film industry lack. This film is an establishment of Samantha's goal of properly representing different types of black people instead of generalizing them into one negatively viewed category. While doing so, she also wanted to be able to show the unity between black folks and the power that unity has. Enjoy this film:)

Ricky Rodriguez follow a group of teen skateboarders as they try to find a place to skate around Dallas. Faced with hostile security guards and unfriendly neighbors, the group tries to find somewhere where they will be accepted.

Amara tries to make a love potion in dreams of finding romance. However, she's missing an ingredient and goes out into the woods to find it. However, she meets a beast and passes out, only to wake up to the knight that saved her. After convincing the knight, Jasmine, to have some tea with her at her cabin, Amara debates on using the newly crafted Love Potion on her. However, she decides against it, and tries to find romance the real way.

In her/his adventure to find what makes her/him happy, the teen explores temporary adrenaline, self love, overcoming failures, and the joy of doing nothing. The teen's experience reveals the eternal question: what makes you :)?

Based on true events that occurred in San Antonio, TX, "Alex," at its root, is a story about forgiveness and hope. As we all know, High School can be such a difficult time for any child. This film explores that concept through the eyes of a transgender teen.

Wish Upon a Snowman

On Christmas Eve, a girl builds a snowman. She goes to bed excited on Christmas Eve wishing for a present but receives an unexpected surprise.

An apple decides to break away from his life in the city and return to the orchard he came from. Overcoming cars, blizzards, mountains, and more, he finally reaches the orchard. However, as he arrives he's swept away by an eagle. Realizing it's his last chance to reach the orchard, he accepts his fate, breaking free from the eagle's claws. As he plummets to the Earth he recognizes the beauty of his home. The film ends with the apple, split, in the dirt of the orchard. With his last dying breath he drops a seed, eventually revealing a tree in its place.

A surgical team is waiting for a special delivery and time is of the essence.

In the near-future, Max can't decide whether or not she wants to renew her membership for her "Friendbuddy," a digital service that provides companionship to most. Alice, her Friendbuddy, sees herself as a true friend to Max, and can't imagine why she would ever want to live without her. Max, on the other hand, can't imagine that Alice could ever truly be a friend to her at all.

Casey, Teresa and Amy are trapped inside a basement. They are starving and alone. Whomever left them there has left them with a mallet and an option out. After a series of desperate attempts, one of them cracks to the captor's twisted game. Turning on the weakest girl, berating her into the corner, Teresa believes she and Amy will survive until Casey comes back to kill Teresa. Casey and Amy leave changed people.

A young girl, experiencing a spiritual awakening in her sleep, its confronted not only by the harsh realities of the world outside of her dreams, but the confusion and violence she encounters within it.

A pet store rat feels lonely after continuously not being adopted. Realizing how the other animals are getting attention from shoppers, he goes on a mission to change his appearance to become more likable.