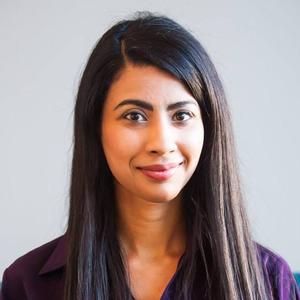 Sampriti Bhattacharyya is the founder and CEO of ONET Global, a stealth startup building data infrastructure for the marine industry. She is a roboticist and received her PhD in Mechanical Engineering specializing in Robotics and Control Theory from MIT (2017) along with a minor in business. At MIT, Sampriti worked on underwater drones and mathematical modeling of non linear dynamical systems which formed the foundation of the project Hydroswarm. Prior to MIT, Sampriti earned a MS in Aerospace Engineering at The Ohio State University and worked on Intelligent Flight Control Systems at NASA Ames. Sampriti's recent work has been extensively focussed on understanding of technology explosion in the maritime space, market opportunities, and she has given many talks both in academic and industry-related conferences like Forbes Under 30, CERAWeek, TTI Vanguard, Oceans Conference, Techcrunch, and others.

As a masters student, Sampriti worked with Fermilab, a DOE High Energy Physics Lab in Chicago on a new kind of innovative nuclear reactor: Accelerator Driven Subcritical Reactor for producing energy out of radioactive waste. She was also a Research Fellow at Tata Institute of Fundamental Research (TIFR), one of India’s top research organizations. She completed her bachelors in Electrical Engineering in India and worked on several renewable energy projects funded by the Indian Department of Science and Technology. Her interdisciplinary background enables her to address large complex problems in frontier tech like robotics, AI, large data-driven systems, and those at the intersection of policy, security and technology.

She has received many accolades from being recognized as one of the Forbes 30 under 30 (2016), Robohub’s 25 Women in Robotics, MassChallenge Gold Prize Winner among many others. Her invention, the Hydrone has been lauded at the Senate Invention Caucus and is now on display in the Victoria & Albert Design Museum in London as one of the top 100 projects shaping the future. She is an active advocate for women in STEM fields and was also awarded MIT’s most outstanding undergraduate mentor award, 2016.