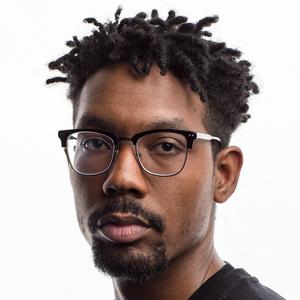 Damon Davis is an interdisciplinary artist who works and resides in St. Louis, Missouri. In 2008, Davis graduated from St. Louis University with a B.A. in Communication Technology with an emphasis on Visual Communication. His vast scope of work reveals his unbridled vision and masterful ability to create timely, candid moments through illustration, painting, printmaking, music, film, and public art. Truly an originator and collaborator, Davis has started several long term projects to explore and give shape to the many facets of his practice. He is both the producer and vocalist of experimental hip hop outfit Scripts N Screwz; co-founder of art collective Civil Ape; and founder of independent music and art imprint, Far Fetched.

After events in Ferguson, Missouri, a new chapter of Davis' practice began as he became involved in the protests and creating new work in response to it. Immediately Davis began illustrating political cartoons, speaking on discussion panels, curating art exhibitions of fellow artist activists, and making films. During this time, Davis created his most identifiable work, All Hands on Deck, portraits of those who have shaped and upheld the movement as a strong statement about basic human rights. His illustrations and All Hands On Deck have appeared in NBC News, The Huffington Post, New York Observer, The San Francisco Globe, Mic, Art Net, and more. A piece from the All Hands On Deck project was recently inducted into the Smithsonian African American History Museum. As an activist and community organizer, Davis helped found The Artists As Tutors program in 2014. He was named as one of The New Faces of Social Justice by Revolt Magazine. He has also been an outspoken voice in favor of Net Neutrality, lobbying in Washington DC as a part of a special delegation for communities of color in 2015. Davis currently co-directing the upcoming documentary, Whose Streets, with Sabaah Jordan.

Davis is a recipient of an Emmy Award Mid America

The Beauty, Resilience, and Genius of Being Black at The LINE Onyx Ballroom 1

The Beauty, Resilience, and Genius of Being Black at The LINE Onyx Ballroom 1