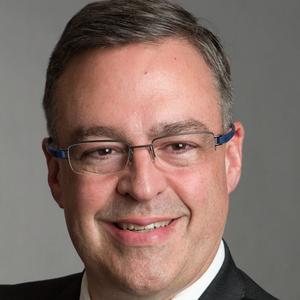 John Haupert is President and CEO of Grady Health System in Atlanta, GA. Haupert began his tenure at Grady in October 2011. Grady Health System is the safety net healthcare system serving Fulton and DeKalb Counties in Georgia. Grady is the primary Level I trauma center and burn center for the Atlanta metropolitan area. In addition, Grady is home to many nationally recognized clinical services including the Marcus Neuroscience and Stroke Center, the Correll Cardiac Center, the Georgia Cancer Center and Grady EMS. Grady also serves as the primary training site for the Morehouse and Emory Schools of Medicine.

A native of Ft. Smith, Arkansas, he is a graduate of Trinity University in San Antonio where he earned a Master of Science Degree in Health Care Administration. He also received a Bachelor of Science in Business Administration from Trinity.

Haupert is a board certified Fellow in the American College of Healthcare Executives and recipient of the ACHE Regent’s Leadership Award. Haupert served as an ACHE Regent and on the Nominating Committee.

Nationally, John serves on the Board of Trustees of the American Hospital Association and is a former Chairman of the Board of Directors of America’s Essential Hospitals.

Access to Care: All Health is Not Created Equally at JW Marriott Salon 7

Access to Care: All Health is Not Created Equally at JW Marriott Salon 7