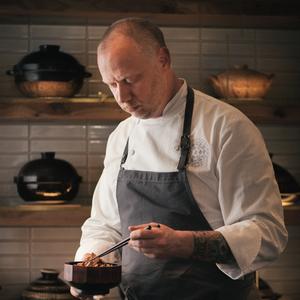 Kyle Connaughton is a chef, culinary educator, and cookbook author. He and Katina Connaughton, his wife, opened SingleThread Farm-Restaurant-Inn in Healdsburg, California in December 2016. The restaurant received a perfect 4 stars from The San Francisco Chronicle in March 2017, a James Beard Foundation Restaurant Design Award in May 2017. It was awarded Two Stars in the 2018 Michelin Red Guide, one of few restaurants to earn the rating in its first year. The restaurant then received Three Stars just a year later in the 2019 Michelin Red Guide. SingleThread is also a member of Relais & Chateaux, an international association of the world’s top restaurants and hotels. In 2018 SingleThread was selected internationally to receive the "One to Watch Award" by Worlds 50 Best Restaurants.

Kyle's culinary background includes working for Michel Bras in Hokkaido, Japan and as Head Chef of Research & Development at The Fat Duck in Bray, England. Kyle worked with Heston Blumenthal and the Fat Duck Team to complete the James Beard and IACP Award-winning The Big Fat Duck Cookbook. He also contributed to Nathan Myrhvold’s Modernist Cuisine series. Kyle is the Professor Emeritus at the Culinary Institute of America and has developed the curriculum for the CIA's Bachelors of Culinary Science program.