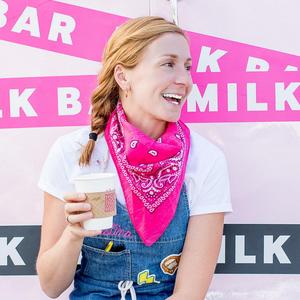 christina tosi is the founder/CEO of milk bar, called “one of the most exciting bakeries in the country” by bon
appétit magazine, with multiple locations throughout new york, toronto, washington, dc, and las vegas. christina
founded the dessert programs at momofuku and went on to build a culinary empire of her own. described by the
new york times as a “border crossing pastry chef”, christina opened milk bar’s doors in 2008 and has changed the
face of baking with her innovative creations like cereal milk® ice cream, compost cookies® and crack pie®.
the culinary trendsetter and sugar genius is a two-time james beard award winner, crain’s new york 40 under 40
honoree and the author of two highly acclaimed cookbooks, momofuku milk bar and milk bar life. momofuku
milk bar highlights the cult favorites from the milk bar kitchen, and milk bar life captures milk bar’s fun-loving
culture and off-the-clock recipes that are easy to make at home. christina is a role model to her team of over 200
and is also a big believer in giving back. the highly motivated lady boss serves on the board of directors for hot
bread kitchen and cookies for kids’ cancer and is an adviser and investor in a handful of food startups, including
the museum of food and drink (mofad) and maple. christina is also a judge on the hit cooking competition
series masterchef and masterchef junior (on fox), playing an integral role in mentoring and making home cooks’
dreams come true.
christina has made headlines in top publications and television programs, including the wall street journal, late
night with jimmy fallon, conan and the today show, has graced the covers of adweek and cherry bombe and
was named one of the most innovative women in food and drink by food & wine. her unstoppable, free-spirited
approach to life and inspiring achievements make her one of the most well-rounded and desirable chefs in the
world.

Better Together: Cult Brand Collaborations at Fairmont Congressional B

Better Together: Cult Brand Collaborations at Fairmont Congressional B