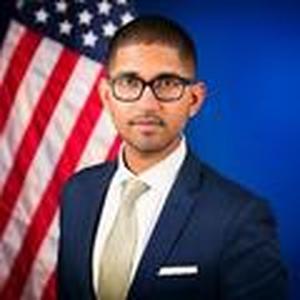 Vikrum Aiyer is the Head of Global Public Policy for the on-demand technology platform, Postmates -- and is host of the American Enough podcast. Previously, Aiyer was as a senior official in the Obama Administration serving both as Chief of Staff to the Under Secretary of Commerce for intellectual property, and as President Obama's Senior Advisor for innovation & manufacturing policy in The White House.

As Postmates creates new opportunities for brick & mortar businesses to distribute their products in the era of e-commerce, it is also shaping the way independent workers and robotics are shaping the labor market. Aiyer helps lead the legislative, regulatory, and policy discussions at the federal, state, and municipal levels which are impacting the Future of Work and the on-demand industry. As Chief of Staff, he coordinated a $3.2B budget in support of the president’s intellectual property agenda. And as a senior economic advisor to the President, he helped steer investments in several advanced manufacturing technologies including smart fabrics, autonomous vehicles, high performance computing, and next generation semiconductors.

In 2017 he was a visiting fellow at the University of Pennsylvania's Wharton School of Business. And in 2015 Forbes Magazine named Aiyer to the 30 Under 30 list for Law & Policy. He currently serves as a Term Member for the Council on Foreign Relations, and on the executive board for the Bay Area Council.