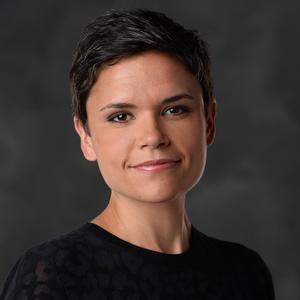 Kate Fagan is the author of the New York Times bestselling book WHAT MADE MADDY RUN, which spent a month as the No. 1 New York Times bestseller on the sports list. WHAT MADE MADDY RUN was a semi-finalist for the PEN/ESPN Award for Literary Sports Writing. Fagan is also the author of the coming-of-age memoir, The Reappearing Act, about her experience coming out while playing basketball at the University of Colorado, and the co-host of the Webby-nominated podcast Free Cookies with her wife, writer and yoga teacher Kathryn Budig.

Kate Fagan spent seven years as a columnist and feature writer for ESPN.com and ESPN The Magazine and as on-air talent for ESPN. Fagan hosted Outside the Lines and E:60 and was a core member of OTL's staple Friday afternoon show, The Friday Four, alongside Bob Ley and Jeremy Schaap. She also made 150 appearances on ESPN's Around the Horn, and served as the show's first female host in 2017.

While at ESPN, Fagan was a founding member of the first all-female national sports radio show, The Trifecta. She also co-hosted the national radio show Will & Kate with Will Cain, and was a co-host for three years on the popular FiveThirtyEight podcast, Hot Takedown. Fagan's writing has won numerous awards, including being selected for The Best American Sports Writing.

Before joining ESPN, Fagan spent three seasons covering the Philadelphia 76ers for the Philadelphia Inquirer. She also played professional basketball in Ireland and in the NWBL, for the Colorado Chill. She and her wife live in Charleston, SC with their two dogs.