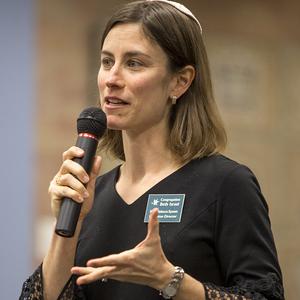 Rabbi Rebecca Epstein decided to pursue a career as a rabbi, as a personal response to witnessing the aftermath of the tragedy of 9/11/2001 in New York City. At the time, she was teaching Hebrew school at a synagogue on the Upper West Side. Rebecca concluded that she could connect both students and adults to the wisdom of Jewish tradition as a way to deal with these demanding times. Concurrently, Rebecca explored Eastern spiritual traditions through her study of yoga. She concluded, however, that Judaism and the path of the rabbinate were the right fit for her. She began her rabbinical studies in 2004 at the Hebrew Union College, and was ordained in 2009 after completing studies in Jerusalem and New York City.

Rebecca and her family arrived in Austin in 2012, where she has served in various roles in the Austin Jewish Community, as well as national Jewish organizations including the Association of Reform Zionists of America and as the Convention and National Events Vice President of the Women's Rabbinic Network.

Rebecca is proud to be a part of the Congregation Beth Israel community, where she strives to connect people of all ages to the wellsprings and challenges of Judaism and Jewish life, through her current role as Director of Education which she assumed in 2014.

Rebecca grew up in St. Paul, Minnesota, and attended Vassar College, graduating in 2000 with honors in Cognitive Science. At Vassar, she also pursued a life-long passion for modern dance and choreography.

Rebecca is proud to be married to Barak Epstein and to share in the parenting of their three daughters.