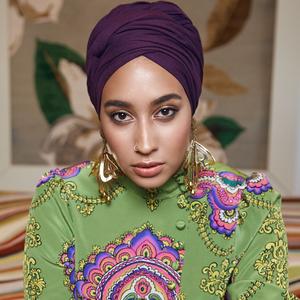 Mariah Idrissi grabbed the attention of the world after making headlines for being the first-ever model to wear a hijab in a major international fashion campaign. Born and raised in North West London, UK, Mariah is of mixed heritage, with her father being Moroccan and mother Pakistani.

She caught the eye of a casting director at a shopping center in London and soon after she was featured in the “Close the Loop” campaign for H&M in 2015. She signed on with Select Model Management in London as the agency’s first hijab-wearing model and signed with Insanity Group Management in 2017. She has been featured in numerous noted publications, including CNN, BBC, and the New York Times, all of which have recognized her status as an influencer for women.

She has since worked with the likes of MAC cosmetics, ASOS, Tods and most recently featured in Rihanna's FENTY beauty campaign. She was also the cover girl for Emirates Woman magazine September 2017.

Mariah is known for her original style, which is both modest and contemporary and represents the modern Muslim woman. Along with being an acclaimed model, she is also an international public speaker and a passionate humanitarian. Her talk on the subject “Changing the Face of Fashion” at the TEDxTeen Conference in 2016 garnered global attention and established her as a game-changer in the industry.

As part of a growing movement bringing modest fashion to the masses, regardless of faith and background, Mariah has emerged as a public figure that champions being true to one’s identity. A role model for many women, she continues to break barriers in the fashion industry, using her platform to spread the message that modesty is always on trend.