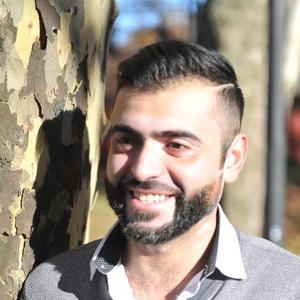 Nas Jab immigrated to NYC from Palestine two weeks before 9/11. Coming from one politicized environment to another, he was able to find refuge and share his stories through food and film.

After completing a dual degree in finance and economics from Baruch College, he started at Focus Features, and then moved to Le Pain Quotidien and later opened his own Palestinian-Latino Restaurant in the Lower East Side of Manhattan. He has used his diverse background of visual and literary storytelling and his love of food to share the many tales of immigrants from around the world. This ultimately, led him to Komeeda and the launch of the world renowned Komeeda Displaced Kitchen dinner series.

Nas has volunteered to help refugees since 2008, working with non-profits that operate in the refugee camps in Lebanon providing access to English classes to students in the camps
He spoke at the Bitten Conference 2017, and has two books coming soon. The first is the Komeeda Cookbook, and the second is personal memoir on food and politics