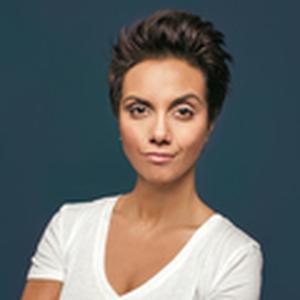 FAWZIA MIRZA is an actor, producer, writer who believes in the power of comedy to tackle divisive topics and breakdown stereotypes. She was named one of '10 Filmmakers to Watch' by Independent Magazine, a White House ‘Champion of Change’ in Asian American Art & Storytelling, a 3Arts Acting Grant Recipient, a ‘Top 10 Creative’ by Indiewire magazine, and a Djerassi Program Writing Resident. She's made award-winning short films, web series and documentaries. She received an SFFILM Society Rainin Fellowship to adapt her one-woman play, Me, My Mom & Sharmila into a screenplay. She's featured in the acclaimed Emmy-nominated, Gotham, Peabody and GLAAD-Award winning web series 'Her Story.' Her first feature, Signature Move, which she co-wrote with Lisa Donato, produced and stars in (starring Indian film legend Shabana Azmi), world premiered at SXSW 2017, screened at over 150 film festivals around the world, won 14 awards (Outfest Grand Jury Prize, Best US Narrative) and is available on Amazon/itunes. She wrote on the new limited series THE RED LINE, executive produced by Greg Berlanti and Ava Duvernay which airs April 28th on CBS.