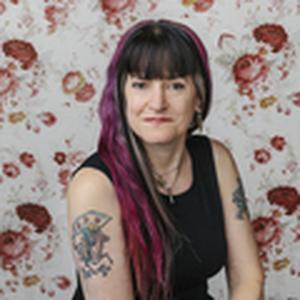 Nan Warshaw co-founded Bloodshot Records in 1994. Two decades and over 240 releases later, Nan continues to slog away at this scrappy indie label in order to work with bands she loves. Through Bloodshot, she is honored to have launched the careers of Ryan Adams, Old 97s, Neko Case, and Justin Townes Earle, and to have had an exceptionally prolific, hardworking role model in Jon Langford (Waco Brothers, Mekons) who taught by example so that she need not compromise her DIY punk ethics to work in the bowels of the music business. Today Nan’s excited to be working new releases by Lydia Loveless, Robbie Fulks, Banditos, The Yawpers, and many more. Prior to Bloodshot, Nan was a DJ in punk rock clubs and on college radio, an independent publicist, a club buyer and indie booking agent, and worked in non-profit organizations (Founder and Executive Dir. of Sound Exposure 1986-1992, Health Care For The Homeless 1988-1991, President of LRY 1980-1981). Nan received her BA from the Evergreen State College in Olympia WA, and an MA in Entertainment & Media Management from Columbia College in Chicago IL. Columbia College presented her with an honorary Doctorate in 2015. Nan was a featured small business owner on the White House web site for Health Care Reform. She currently proudly sits on the advisory boards of The Future Of Music Coalition, The Chicago Music Coalition, and on the honorary board of Foundations Of Music. Nan is honored to be a City of Chicago SXSW ChicagoMade Ambassador.