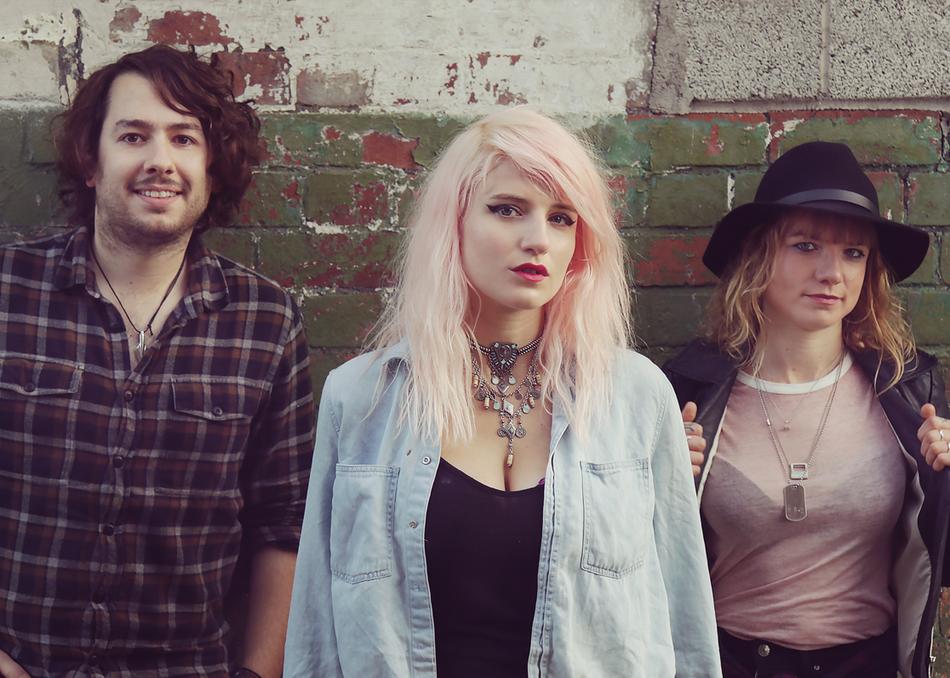 If you like breezy, supremely melodic, semi-acoustic pop with roots in both the UK folk-rock and US singer- songwriter movements of the late-‘60s and early-‘70s, then you’ll love Wildflowers, a trio comprising Bennett sisters Siddy (lead vocals, guitar, lyrics) and Kit (who sings and plays accordion and keys) and co-songwriter James Ashbury (who sings and plays mandolin, acoustic guitar and kick drum).

Don’t be fooled, however, by the air of easy-going harmony. Lead singer and lyricist Siddy Bennett, possessed of a voice that is equal parts husky and honeyed, didn’t just sail into her role. In fact, her journey has been rocky, to say the least. Born 24 years ago, in an old Elizabethan farmhouse in Arlingham, Gloucestershire, which her parents - an errant jazz musician father and a radical socialist, actress mother - used to look after.

“It wasn’t that we were wealthy - it was to keep squatters at bay,” explains Siddy, who adds that the house, is today, owned by Children’s Laureate Michael Morpurgo.

The Bennetts - Siddy and her three older sisters, including Kit, were an atypical family. They didn’t have a television, her mother insisting that fast-paced TV shows and adverts were having an adverse effect on their brains. “She wanted us to use our imaginations instead,” says Siddy. “We always used to get invited round to other people’s houses because we would come up with the craziest imaginative games. We’d get lost in our own world of make-believe and take other children away from their Nintendos.”

Siddy seized the moment aged 16, in the middle of a history lesson, when she told her teacher she was quitting. She decided to join Kit in Bristol, where she studied music - she certainly had an ally in Kit. “She’s pure rock’n’roll,” Siddy says proudly of her sister. The Bennett girls might like a drink and a smoke, and they know how to party hard, but they’re also highly articulate and well-read, with a fascination for everything from US hip hop to Greek mythology.

James, meanwhile, with whom Siddy formed Wildflowers in 2012, hails from Birmingham. His entrée into the music industry was accidental - literally: he started playing guitar following a fall from his skateboard, leaving him in a cast for several weeks, unable to do anything but learn to play the six-string.

Skateboarding’s loss was music’s gain, and after encountering Siddy at music college in Bristol he could tell they had a musical future together.

“Out of everyone on the course, she seemed a really interesting person - a good person to work with,” he recalls. “She was just so confident.”

They spent a memorable first night out as friends, at an open-mic night in Bristol. James immediately invited her to form a band and become his songwriting partner. Their influences certainly dovetailed quite nicely, with James’ love of the acoustic finger-picking style of John Martyn and Bert Jansch and harmony-pop of Crosby Stills & Nash, The Eagles and James Taylor. Before long, the pair were the hit of Bristol, able to fill out any venue in the city. But they knew they would have to leave to expand their horizons and so, with Kit now in the band, the three upped sticks and headed to Brighton, where they - plus tour manager and designer Matt Shurben - shared a one-bedroom flat.

Wildflowers were born, and their music began to take shape, via constant gigging around the country, playing support to folk bands and making appearances at festivals. Eventually, there were enough songs for an album: On The Inside, a bouquet of blissful melodies, composed by Siddy with James and given the final all-important flourishes by Kit. Half produced in Detroit and Brighton and given a bright, bold mix, this is music that reflects the band’s love of folk, country, pop and rock and maybe a smidgeon of punk.

Wildflowers have performed in front of tens of thousands of people including support to Led Zeppelin’s Robert Plant, Tom Odell and in 2015, they crowd-sourced the costs of playing and travelling from Scotland to Glastonbury: they played seven gigs in seven nights, including one at Hadrian’s Wall. Having all recently relocated to Denver, CO, in the few moments that they’re not touring, flying between London, Detroit and Denver or working on music, Siddy and Kit film and produce their own YouTube Vegan cookery show Wild Vegan.

Their ambition is strong and their potential for massive mainstream success is considerable. They are signed to Detroit based Original 1265 Recordings (via Caroline/Capitol), and they have some of that city’s fiery spirit. Label founders Kevin Nixon and Sarah Clayman saw the band in London and then again at the annual SXSW festival in Austin, Texas, in 2014. There, they immediately signed them and took them to Detroit.

But where to position them? “We’re cool pop,” decides Siddy. “Cool pop with a rock element. And an anarchist streak!”